When Florida became a popular tourist destination in the late 19th century, visitors bought souvenirs to remember their visit. The Museum's collection of these period pieces include fine citrus-motif china, miniature hand-painted jewelry bearing Florida scenes, silver spoons, postcards, and promotional material. The period from 1890 to 1930 has been referred to as the “Golden Age” of Florida souvenirs. It was during this time that items for sale to well-to-do visitors were usually of higher quality to meet the tastes of the leisure class who visited the grand hotels. Beginning in the 1920s, and especially after World War II, travel to Florida became affordable to the masses. Roadside attractions sprang up to cater to middle-class tourists. As with the earlier tourists, they too wanted souvenirs of their visit to the state. Tourist memorabilia from the mid-twentieth century to the present often has a distinctive “Florida kitsch” quality. 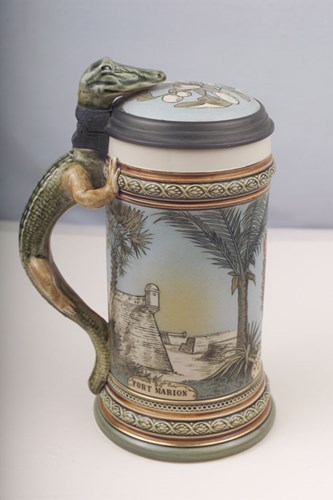 Made by Villeroy & Boch in Mettlach, Germany, and sold in St. Augustine, the stein’s alligator handle provides a distinct accent. Two scenes, the Old City Gates and Fort Marion (Castillo de San Marcos), are featured in the sides. The stein was among the finest of the more expensive souvenirs available to wealthy visitors to the city. 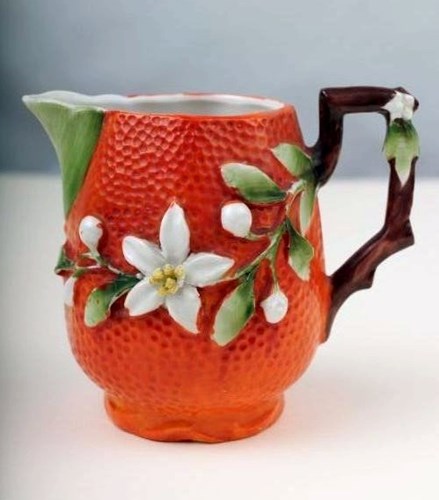 The fragrant orange blossom has been the official state flower of Florida since 1909. This porcelain souvenir, ca. 1890−1910, was made in Germany for retail to Florida tourists. It is decorated with a textured orange peel surface. The reverse side has gold lettering: “From Florida.” 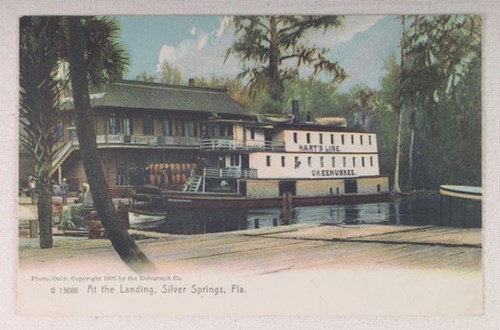 Postcard of the steamboat Okeehumkee at Silver Springs, 1905

Silver Springs is one of the oldest tourist attractions in the state. Beginning in the later 1860s, steamboats took visitors up the heavily-forested Ocklawaha River to one of the largest artesian springs in the world. Visitors viewed the crystal-clear water in glass-bottomed boats. These Riverboat excursions were a popular way for northern visitors to explore the wilds of Florida. 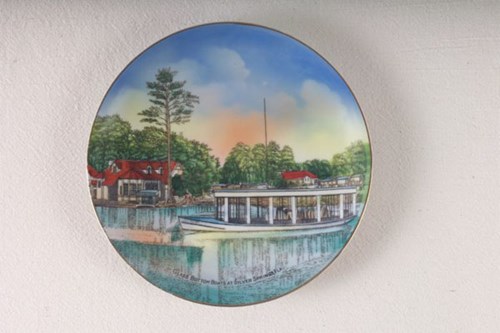 Glass-bottom boat rides gave visitors to Silver Springs a window into the crystal clear springs. This hand-painted plate was made in Germany for retail in Florida. 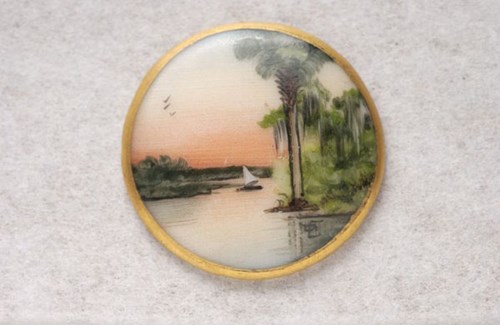 Olive Commons. Commons moved from Indiana to an island in the St. Johns River in 1908. Inspired by the natural beauty of Florida, she began painting landscapes on pieces of porcelain, which she dubbed cameonas. She soon realized that there was a tourist market for her art. The cameonas with the gold painted border are believed to date earlier than the un-bordered variety. 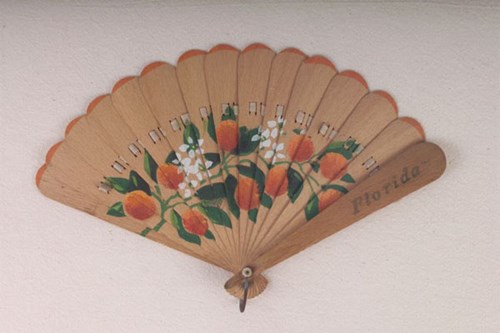 Fans were both decorative and practical in the Florida heat. The oranges and orange blossoms on this fan were hand-painted. From the beginning of the 1900s until about World War II, fans were among the most popular souvenirs, equivalent to modern day t-shirts. 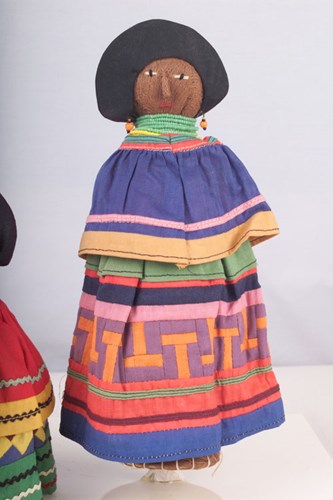 Seminole women made the doll’s clothes using the same patchwork styles found in their own clothing. The absence of zigzag rick-rack strip material helps date this doll prior to the 1950s. Palmetto fiber became the primary material used to make dolls by the 1940s, but its earliest use dates to around 1918. The Seminole sold these and other tourist items at exhibition camps setup along the Tamiami Trail in the 1930s and 1940s. 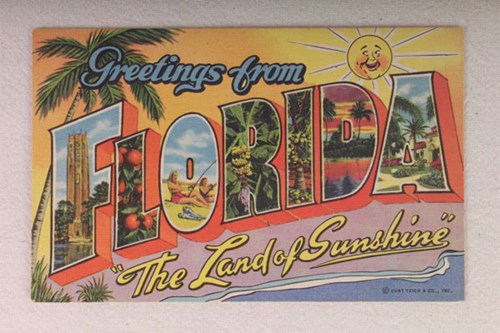 Curt Tiech, who immigrated from Germany to America in 1895, would become the most prolific producer of travel postcards in the US. In 1931, he introduced linen “Greetings From” postcard series. They followed the formula of the name of a state, city, or attraction in 3-D block letters, in saturated colors, with images inside the letters. As more Americans owned cars and the highway system was developed, Americans fell in love with traveling and exploring the beauty of America’s vast landscape. The “Greetings From” series allowed Americans to share and save pictures of their travels. 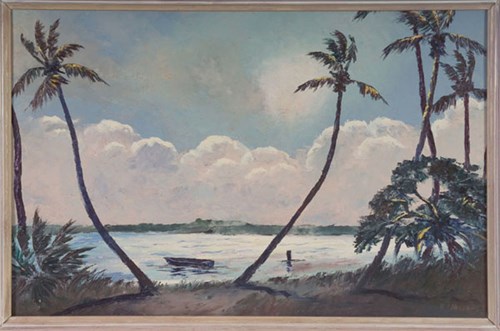 Beginning in the mid-1950s, a group of twenty-six African American artists from the Fort Pierce area, created a genre that captured an idealized vision of Florida’s landscape. These artists would eventually become known as the Florida Highwaymen because they traveled the highways selling paintings from their cars. Compared to other highwaymen artists, Roy McLendon has one of the widest ranges of subject matter, often painting vignettes of everyday life in rural coastal Florida 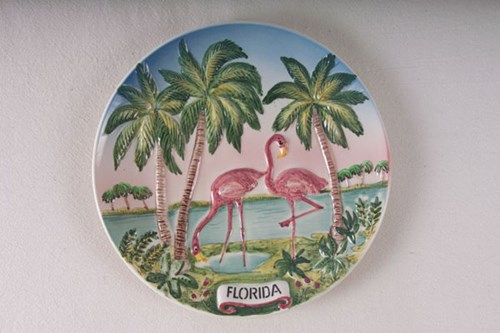 Although this plate was made in Germany for the Florida market, Japan became the main source for much of the Florida kitsch souvenirs that were made in a countless variety.