The Museum's collection of military items extends from the Seminole Wars to the Global War on Terror. While the collection includes some significant artifacts such as Civil War flags and weapons, the majority of the uniforms, insignia, and equipment date to the two World Wars. The collection focuses on how military service members from Florida participated in historical conflicts. The following are a few representative artifacts from the Museum’s collection. 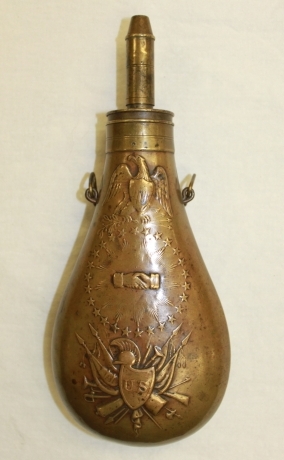 The design of this US rifle flask, today called a “peace flask,” got its name from the clasped hands symbol, which originally was used on the reverse side of peace medals given to Indian leaders as a token of friendship by the US government. The Second Seminole War-era flask is dated 1838 and stamped with the abbreviated name of Ames Manufacturing Company of Massachusetts.

The flask is on display in the Seminole Wars section of the Forever Changed exhibit. 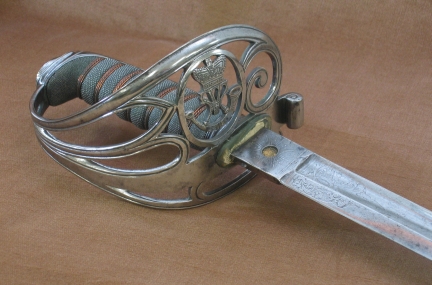 Lieutenant Lawrence M. “Laurie” Anderson of Tallahassee carried this sword during the Civil War. Anderson was leading a company of the 1st Florida Infantry when he was killed in action at the Battle of Shiloh, Tennessee, in 1862. The sword was retrieved by his friend Captain William Poole, who served with the same unit. Because of a shortage of material, Southern forces often carried British-made weapons and equipment imported through the Union blockade.

The sword is on display in the Florida in the Civil War exhibit. 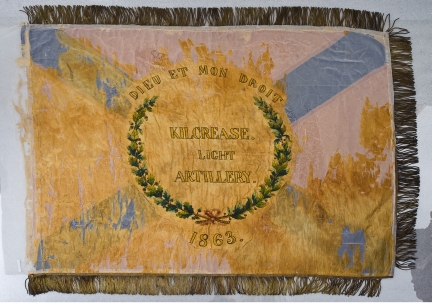 The artillery battery’s flag was reportedly made from the wedding dress of Mrs. Rhoda Kilcrease, who sponsored the unit in the Civil War. Based on the silk construction, it is more likely that only the cream side was from a wedding dress. The distinctive style of the embroidery has recently been attributed to a woman who made flags in Charleston, South Carolina. The French motto translates as “God and My Right.” The reverse side of the flag bears a St. Andrew’s cross battle flag design. The flag was presented to the Florida artillery unit in 1863, when they were serving in South Carolina. By March of 1865, the unit was back in Florida and fought in the Battle of Natural Bridge. Since this was a rather fragile silk presentation flag with heavy metallic fringe, instead of a military-issue battle flag, it is not certain that it was carried at Natural Bridge.

An illustration of this flag, showing how it looked when it was new, is on display in the Civil War exhibit, along with five other flags. This flag is one of twenty original Florida-related Civil War military unit flags, along with a civilian secession flag, in the permanent collection. 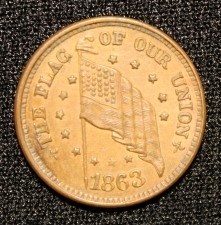 During the Civil War, there was a shortage of US coins. To help fill this gap, private firms minted tokens that were the equivalent of a penny. Some were patriotic, such as this example bearing an American flag, while others advertised a particular merchant.

After Florida seceded from the Union in early 1861, the American flag did not fly again in Tallahassee until the end of the war. On May 10, 1865 Union General Edward M. McCook entered the capital city and an American flag was quietly raised over the Capitol. Later, on May 20, there was a formal flag raising ceremony at the building

This grave marker from the Civil War belongs to Union sailor Ephraim Hearne, a black Navy crew member of the Federal blockading vessel USS Fort Henry, who died at the age of 28 while serving aboard ship near Cedar Key, Florida in 1863. The cause of death was listed as “phthisis” which was an early term for tuberculosis. He was buried ashore on Sea Horse Key, along with a few other sailors who died while on blockade duty. In 1927, the US War Department transferred his grave marker to the Florida State Museum after his grave was marked with a tombstone. It can be seen on display in the Civil War exhibit at the Museum of Florida History. 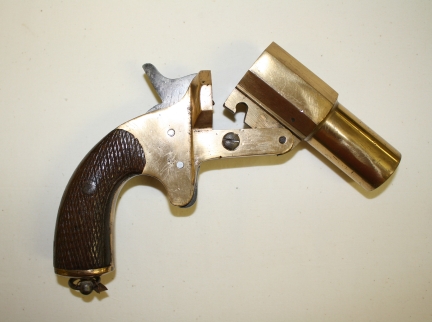 This item was brought back from France as a World War I souvenir by Army Infantry Lt. Karl Bardin, who was a resident of Jacksonville. Flares were fired into the air and used as a signal to troops, particularly in the chaos of night combat in trench warfare. The flare gun is pictured with the hinged barrel chamber open. 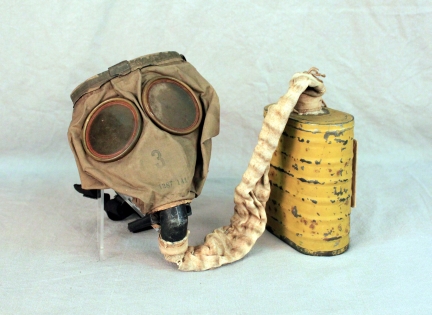 Gas mask used in France by a soldier in the US 1st Infantry Division, 1917–18

The use of poison gas in World War I introduced on a large scale a new and terrifying type of warfare. The yellow canister filtered out the potentially fatal gases. 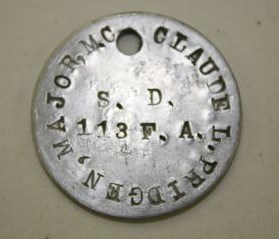 Pictured is the World War I-era identification tag, or “dog tag,” of Major Claude L. Pridgen, a member of the 113th Field Artillery, 30th Division.  During World War I, all American soldiers received two round aluminum tags such as this one. The tags were hand-stamped, featuring information including the soldier’s name, rank, and sometimes their serial number, religion and hometown. These tags were hung from their necks by cord or tape for easy identification and safe-keeping. (Collection of the Museum of Florida History) 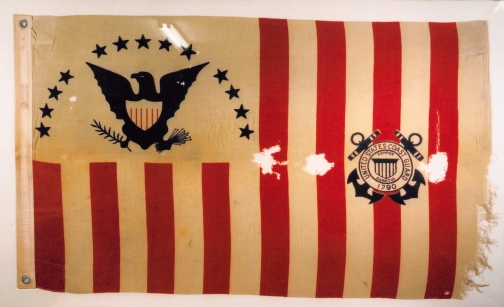 This flag is associated with Florida native and Coast Guard veteran Jonathan C. Dickinson Jr., who later served as a director of the Florida State Museum in Gainesville after the war. In Florida waters, the Coast Guard hunted for German submarines and also the threat of German saboteurs. In addition to guarding Florida’s coast and the rest of the country’s waters, the Coast Guard also served overseas during the Second World War.

The flag is on display in the Florida Remembers World War II exhibit. 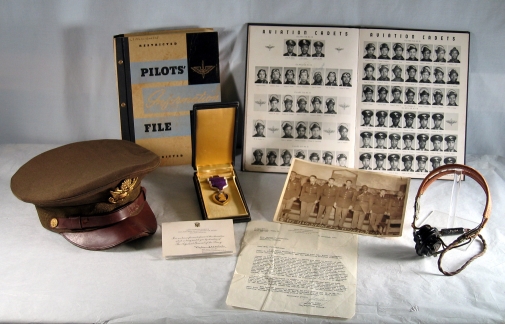 Memorabilia of a Tuskegee Airman pilot, 1943–45

Pensacola native Lt. James R. Polkinghorne Jr. attended school at Florida A&M College (now University) prior to entering military service in World War II. He trained as a fighter pilot and served in Italy. While on a combat strafing mission, Polkinghorne was last seen flying into a cloud bank. He was listed as missing in action and later reclassified as presumed killed. His body and aircraft were never recovered or identified. Polkinghorne was the only Tuskegee Airman fighter pilot from Florida to die in combat during the war. His family received his posthumously awarded Purple Heart Medal seen in the grouping above. Among other items included in the group are his pilot’s earphones, his Tuskegee Airman cadet yearbook, and a letter from the Army noting his continued missing in action status.

The grouping is on display in the Florida Remembers World War II exhibit. 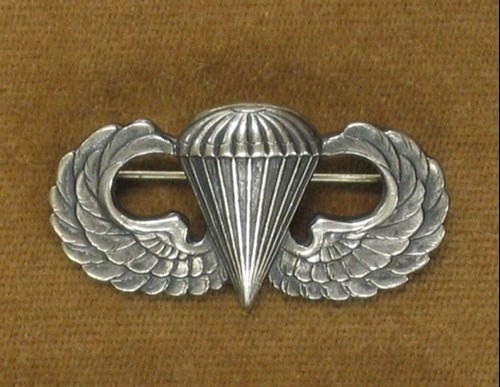 Dating from World War II, this sterling silver badge was awarded to service members who completed basic parachute training. During WWII, one Army unit of paratroopers trained at Camp Blanding, near Starke, Florida. Airborne assault training also occurred at Camp Gordon Johnston. In one exercise, 1,000 paratroopers parachuted onto Dog Island on the Gulf coast. Tragically, ten soldiers missed the island and drowned when they landed in the water and were unable to remove their parachutes and equipment. An example of a parachutist badge is displayed in the Museum’s World War II exhibit. (Collection of the Museum of Florida History) 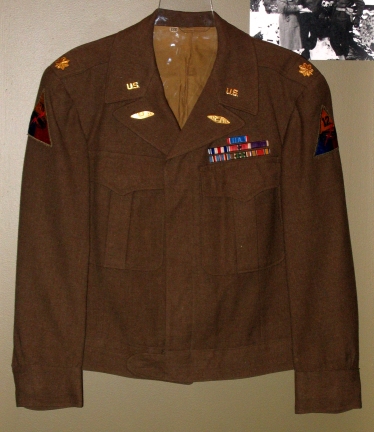 Major Craig Mills wore the short Eisenhower or “Ike” jacket in the later part of World War II. Mills, who grew up in Plant City, Florida, served as an Army tank commander in Europe. Major Mills fought in several campaigns, including the Ardennes (Battle of the Bulge) and the massive Allied push into Germany in early 1945. He received multiple medals for valor, including the Distinguished Service Cross, the Silver Star, the Bronze Star, and Purple Heart. By the end of the war, he was the most highly decorated soldier in his unit. The “Ike jacket” got its name because US Army General Dwight D. “Ike” Eisenhower commonly wore this style of uniform.

The jacket is on display in the Florida Remembers World War II exhibit. 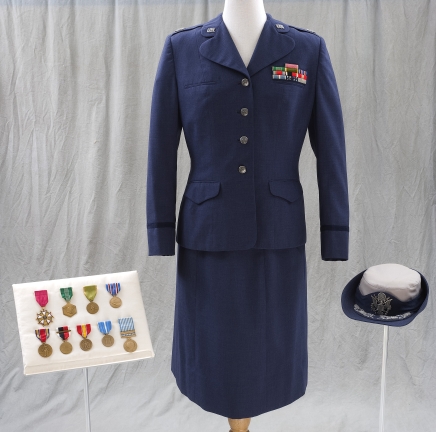 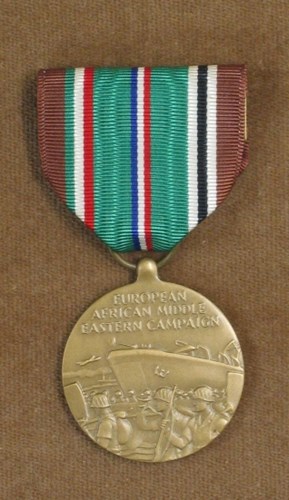 This is a WWII European-African-Middle Eastern Campaign Medal. This medal was given to all members of the US Armed Forces who served at least 30 days during World War II within the areas noted on the medal. This included operations directed against Nazi German forces in North Africa, Italy, and in Europe. For a period, it also included fighting against the fascist Italian government, before it surrendered. The medal shows troops coming ashore from a landing craft. An example of this medal is on display in the Museum’s Florida Remembers World War II exhibit. 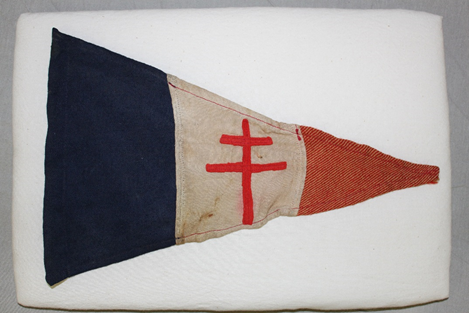 During WWII, after the Germans occupied most of France, some Frenchmen living in exile formed a pro-Allied military organization known as the “Free French Forces” to help liberate their country. The small triangular pennant form of the French flag bears the Cross of Lorraine, which was adopted as a symbol of the Free French. This example was brought home as a souvenir by a US Army medical officer who served in France. 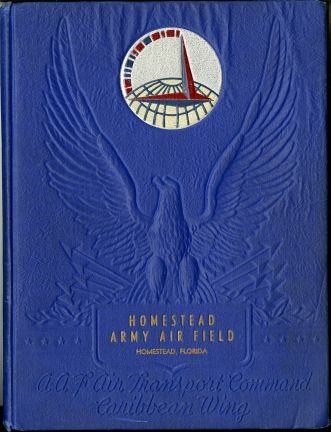 This World War II commemorative unit book, done in a yearbook style, belonged to a serviceman who was stationed at Homestead Army Air Field near Miami. The emblem of the US Army Air Forces’ Air Transport Command is embossed on the cover, and the book documents the members of the various units that made up the Caribbean Wing of the Air Transport Command. During the war, these type of books were common in the US Army Air Forces, and featured photos of individuals in both trainee classes and regular units. It provided a souvenir publication that soldiers and airmen could purchase to remember their military service. 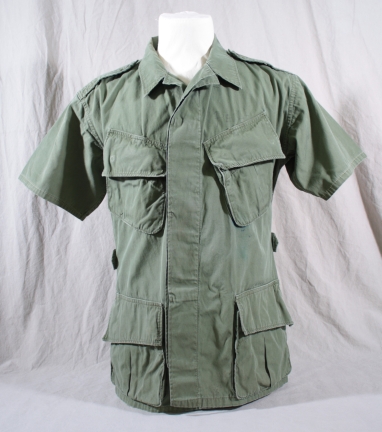 The uniform was worn by a Florida native who entered service from Jacksonville Beach. During his tour of duty in the Vietnam War in 1966–67, he served with the 5th Marine Division in the northern part of South Vietnam near the border with North Vietnam. Due to the heat, he had the sleeves shortened, although this was against official regulations.