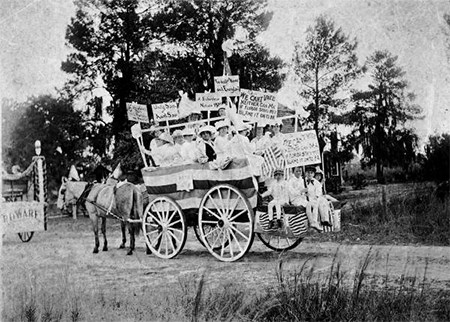 In 1893, Tampa’s Ella Chamberlain started Florida’s first suffrage organization, the Florida Woman Suffrage Association (FWSA), but after she left the state in 1897, the FWSA fell apart.

The state’s suffrage movement stalled until 1912, when a group of Jacksonville women established the Florida Equal Franchise League (FEFL), a local group. The next year, the Florida Equal Suffrage Association (FESA), a state organization, formed in Orlando. The suffrage department of the Florida Federation of Colored Women’s Clubs worked with its local clubs.

Florida’s suffrage movement remained small compared to that of the Northeast. Still, Florida suffragists engaged in a variety of activities to promote votes for women. Local leagues hosted teas and banquets, presented musical programs, distributed literature, and participated in parades and fairs to raise awareness for the suffrage cause. They sent resolutions to the state’s U.S. congressmen and lobbied state legislators. The legislature did hold hearings on a state suffrage amendment, but would not support it.