Once women had the vote, politicians acted quickly to win their support, and federal and state governments passed many of the reforms that women had long pursued. However, it soon became clear that women were not voting as a bloc and cast their ballots much the same way as men did. Race, ethnic background, and class mattered more than gender. Also, fewer women than men were voting. Male politicians began to lose interest in appealing to the new voters.

Black Women and the Vote 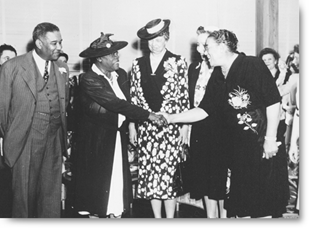 As soon as women gained the vote, Black women had to fight to keep it. As Black women organized to register to vote in the South, they faced hostility and harassment. African Americans in Jacksonville had begun a voter registration drive in 1919 that transformed into a statewide movement. Black women participated in the drive, which continued after suffrage passed. Despite attempts by some officials to keep them from registering, thousands of Black women registered to vote.

During the 1920 presidential election, racists used violence and intimidation against Black people to prevent them from voting. The worst violence occurred in Ocoee, when Ku Klux Klansmen flooded the town, killing residents and burning homes. Election-related violence was so extreme it ended attempts by Black communities in some areas of Florida to organize politically. Still, Black women and men continued to fight for their right to vote, until passage of the 1965 Voting Rights Act enabled disenfranchised African Americans to regain access to the ballot box. 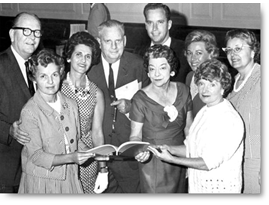 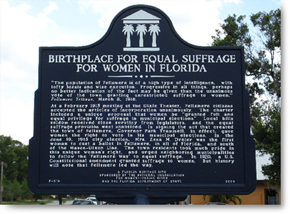 Some towns and counties in Florida had given women the right to vote in local contests before passage of the Nineteenth Amendment. In 1915, Fellsmere became the first Florida town to allow women to vote in city elections. In 1917, Marian Horwitz was elected mayor of Moore Haven, the state’s first woman mayor. After suffrage passed, women had more opportunity to run for political office. In 1922, they gained a few offices at the county level. In 1928, Edna Giles Fuller became Florida’s first woman state representative, while Ruth Bryan Owen won election as the first woman from Florida in the U.S. Congress.

As Florida’s population increased and new legislative districts were created, more opportunities opened for women office-seekers. As of 2019, women make up about 30% of the state legislature. Since 1984, women voters have outnumbered the men in every presidential election year. While passage of the Nineteenth Amendment did not bring about the sweeping reforms that suffragists had hoped, it did give women a greater voice in government. Women continue to make their voices heard by exercising their hard-fought, constitutional right to the vote.

[Mary McLeod Bethune], "Mrs. Eleanor Roosevelt and others at the opening of Midway Hall, National Archives, 1943

Members of the League of Women Voters pose with Senators in the Senate chamber - Tallahassee, Florida,  State Archives of Florida, 1965