The Okeehumkee on the Oklawaha, painting by Christopher Still

At the end of the 1800s, agriculture, cattle raising, and manufacturing became important. Roads and railroads were built to support these industries. Steamboats carried people, mail, and supplies along Florida rivers and to distant places.

Tourists began to arrive because of Florida's natural beauty and mild climate. Land was cheap, so some people came to invest in businesses. The railroads allowed Florida products, especially citrus, to be sent to northern markets. During the Spanish-American War in 1898, Florida was the base for U.S. efforts to help Cubans win freedom from Spanish rule.

By the early 1900s, Florida's population and prosperity were growing rapidly. After World War I, land developers, businessmen, new residents, and vacationers in vehicles added to this growth. Many people grew wealthy by buying, developing, and selling land. The potential of the Sunshine State seemed endless. 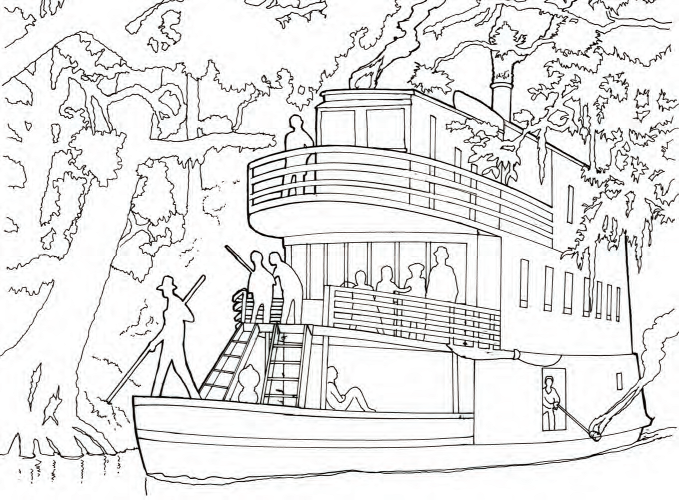 How is this steamboat similar to or different from boats you have seen? Find photos of boats at www.floridamemory.com to compare. Go to www.christopherstill.com/fl-house-of-reps to learn about steamboat travel in Florida.

What do you know about baseball in Florida?

The development of transportation enabled people to come to Florida to live, work, vacation, and play baseball! Professional baseball leagues were created in the late 1800s, and many teams were located in northern states. As the sport became more popular, teams decided to train in Florida during the colder months.

Curators assemble exhibits to display and interpret a collection of related objects. Most exhibits are found in museums, but some can be found online. Exhibits are a great way to learn about interesting topics, and they can inspire us to learn more.

Your task for this Web Quest is to look through the Florida Memory online exhibit about baseball in Florida. When you are done, search the additional topics listed to learn more about this period of Florida's history

What professional teams do you recognize in the exhibit?

What cities had spring training?

Who was John Henry "Pop" Lloyd?

Which Florida governor is pictured wearing a New York Yankees uniform? What was the occasion?

When did women play professional baseball? Why?

Where in Florida are the fields in the exhibit located?

State Reptile
Alligators symbolize Florida's vast untamed wilderness and swamps. They are found throughout Florida and prefer lakes, swamps, canals, and other wetlands.
State Bird
The Mockingbird is a year-round Florida resident and often sings all night long, especially under bright springtime moonlight.
State Butterfly
The Zebra Longwing butterfly is found throughout Florida, although it is more common in south Florida, particularly in the Everglades National Park.
State Animal
The Florida Panther is a large, long-tailed, pale brown cat that grows to six feet or longer. They are the most endangered of all the Florida symbols and reside mostly in south Florida.
State Marine Mammal
The Manatee, also called a sea cow, is a gray, waterplant-eating, gentle giant that reaches eight to fourteen feet in length and can weigh more than a ton.
State Wildflower
The Coreopsis is a colorful flower used in Florida's roadside plantings and highway beautification programs. It is found in a variety of colors ranging from gold to pink.
State Tree
The Sabal Palm is the most common palm in Florida. It grows in almost any soil and has many uses, including food, medicine, and landscaping.
State Shell
The Horse Conch also is known as the giant band shell. It is native to marine waters around Florida and can grow to a length of twenty-four inches.

To learn about all of Florida's symbols: dos.myflorida.com/florida-facts/florida-state-symbols/