This book investigates Florida's colonial history as told by those who lived it, including slaves, Spanish conquistadors, Native Americans, women, and many others. It provides in-depth biographical sketches for many people in colonial Florida.

This scholarly compilation of the work of Florida historians is readable and engaging. The book contains stories and common interpretations of the history of Florida from the Paleoindians to modern day. Due to the book's length and language, it is recommended for high school students working on a paper or students who are very interested in the subject.

This is an engaging, brief version of Florida history by the state's preeminent colonial historian. The author reads his book on the audio CD in a lively and easy-to-follow manner. It is an excellent resource for introducing adults and children to the last 500 years of Florida history.

This book provides an overview of the primary Spanish explorers of Florida. Primary sources are used to illustrate the explorers' tales. A note of caution: the author presents the Fountain of Youth as a possible motivation for Ponce de León. However, serious historians discount this idea for many reasons, including the fact that the first mention of the myth in documents occurred more than 100 years after de León arrived in Florida.

Juan Ponce de León was the first European to explore Florida with permission from the Spanish crown. However, unrecorded expeditions, probably slave raids, may have occurred before 1513. In 1521, de León returned to southwest Florida to establish a settlement, but a Calusa attack forced the Spaniards to leave. Ponce suffered an arrow wound and later died in Cuba.

This well-researched book explores and debunks historical myths about Ponce de León, including his fabled search for the Fountain of Youth and whether scholars believed the Earth was flat. It discusses his role as the governor of Puerto Rico and the first recorded European explorer of Florida. Using primary documents, the author places de León in the context of the Age of Exploration, Columbus's voyages to the New World, and the treatment of the Taíno Indians, who inhabited the Greater Antilles.

This book discusses the history of Ponce de León, from his life in Europe as a knight to his role as governor of Puerto Rico and discoverer of Florida. It also describes the Taíno and Calusa Indians. It includes a timeline of important events during de León's life and illustrations of places, events, and nautical equipment with explanations.

This book provides a historical context for Juan Ponce de León's life and work as an explorer. It also challenges long-standing myths surrounding de León, such as his purported search for the Fountain of Youth. Well illustrated, this volume includes insets with information about the cultures, important people, and events of the time. A glossary, timeline, maps of de León's expeditions, and suggestions for further reading are also included.

This is one of the first books to examine the commonly held belief that Ponce de León came to Florida looking for the Fountain of Youth. The author describes his attempt to recreate de León's historic voyage to La Florida by sailboat.

This well-researched biography of the man who became known as the discoverer of Florida is an enjoyable read. It contains pictures of primary sources as the illustrations.

In 1528, Spaniard Pánfilo de Narváez landed with 400 men near Tampa Bay in Tocobaga Indian territory and marched north. This expedition was the first to travel the interior of Florida. It was marked by hardships and ended in failure. The hungry group reached Aute at Apalachee Bay, where, facing starvation, they were forced to eat their horses. They built rafts to sail to Spanish territory in present-day Mexico, but lost many men at sea, including Narváez. Only four men survived the ordeal. The rest were captured or killed by Indians or died from drowning, starvation, or illness.

This piece of historical fiction follows the journey of Esteban and Álvar Núñez Cabeza de Vaca from Texas to Mexico through the eyes of a young Native American boy named Chakoh. This is a readable chapter book without pictures to distract one from the story.

This book is a fictionalized account of the four survivors of the Narváez expedition: Cabeza de Vaca, two other Spanish captains, and Esteban, a black slave, who was among the first people of African descent to arrive in North America. After a shipwreck on Galveston Island, they wandered the American southwest for eight years before finally reaching Mexico City in New Spain. This is a well-written and exciting book that is illustrated with pen and ink sketches.

During the 1528 Narváez expedition, Álvar Núñez Cabeza de Vaca was the second in command. He was one of only four known survivors of the expedition. Cabeza de Vaca and the other survivors were marooned near Galveston, Texas, and spent eight years living with natives and later walking through Texas and Mexico before they arrived in Mexico City. Cabeza de Vaca wrote a story about the experience.

This book transforms the life of Cabeza de Vaca into an adventure story. While this exciting tale draws the reader into the story, it also shows how his views were transformed from perceiving American 13 Indians as savages to the realization that they were fully human. This story discusses how his capture by Native Americans led to his deeper understanding of their cultures, a rejection of his prejudices, and his decision to be a champion for them.

This edited translation of Cabeza de Vaca's recollections allows us to read about his fascinating journey from his perspective. This is a very readable translation and a wonderful resource for students writing about the Narváez expedition.

Waldman, Stuart, and Tom McNeely. We Asked for Nothing: The Remarkable Journey of Cabeza De Vaca. New York: Mikaya Press, 2003.

This book tells the story of Cabeza de Vaca, who sailed with the Narváez expedition to Florida. De Vaca lived with Native Americans for eight years, during which time he came to respect and understand them, and afterwards, he became an advocate for them. This book is a good introduction for young readers to the history of the Age of Exploration and the conflicts that arose when the Old World met the New World.

Esteban, a free black explorer, was one of four survivors of the Narváez expedition. He and the other survivors traveled together to look for a Spanish settlement. Esteban was the negotiator and interpreter when the group encountered native tribes.

This fictionalized biography of Esteban tells of his life from the beginning of the Narváez expedition to the dramatic end of his life. The author's engaging style makes this book an enjoyable read.

Juan Ortiz was associated with the doomed Narváez expedition in 1528. He was captured by the Uzita Indians and was nearly roasted alive, but was saved by pleas of the chief's daughter, Acuera, and other female relatives. He lived among Native Americans for several years. He was freed in 1539 by the Hernando de Soto expedition and became its official interpreter. He died two years later, shortly after crossing the Mississippi River into modern Arkansas.

This book is a fictionalized account of Juan Ortiz's experiences in Florida, including his time with the Narváez expedition, the Uzita and Mocoso Indians, and the de Soto expedition. The author alternates fictional chapters that tell Ortiz's story and related, nonfiction interlude chapters. Steele lists four primary sources for Ortiz in the New World.

This work of fiction tells the story of Cochula, who was enslaved by de Soto and his conquistadors on their journey through the modern-day southeastern United States. Although the story begins after de Soto has left Florida, it is an interesting tale of the experiences of Native Americans during this time period. 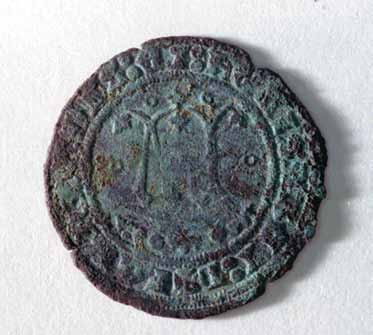 This well-researched and easy-to-read biography of Hernando de Soto begins with his birth in Spain and moves on to his exploits in South America, his exploration of the southeastern United States, and his death in Arkansas. The book has a glossary, timeline, bibliography, index, and many illustrations. It is a great source for a young person's research paper.

This book discusses de Soto's early career, his exploration of the Southeast, and the effects of the expedition. While the book includes a lot of the history, it has few illustrations. It may be best suited for middle school children working on a project.

This book about Hernando de Soto covers his career as a soldier and explorer, focusing on his exploration of the southeastern United States, which began in Tampa Bay and ended with his death in Arkansas. The book is written in a straightforward style and contains a glossary.

This fictionalized account of Hernando de Soto's exploration of the southeastern United States is based on the actual writings of Rodrigo Rangel, de Soto's personal secretary. It is written from Rangel's point of view and describes how Rangel met de Soto in Spain, the expedition, and de Soto's death.

This book is a biographical account of Hernando de Soto's early life, his exploration of the Southeast, and the impact that this had on Native American populations. It is heavily illustrated and easy to read. Although unbiased, it presents a sanitized version of events that makes it more suitable for young readers.

This book combines firsthand accounts by members of de Soto's team with archaeological information to trace the expedition through Florida. The authors use this evidence to take a fresh look at the Native American tribes that Spaniards encountered along their journey. 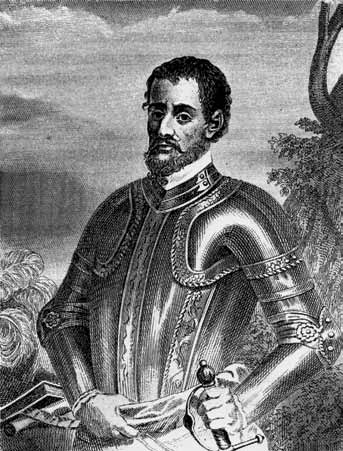 Written in a clear and engaging style, this book is a thoroughly researched and accurate account of de Soto's life and explorations. The narrative draws the reader into the time period and explains how de Soto's violence and ruthlessness were a product of his culture and experience.

Pedro Menéndez de Avilés was a brilliant Spanish mariner who founded St. Augustine in 1565. He was sent to Florida to destroy a colony established by French Huguenots near modern-day Jacksonville. He defeated the French and, while serving as the first governor of Spanish Florida, established numerous outposts along the Atlantic coast. One of Menéndez's goals was to spread Catholicism to the Indians.

This is the first English translation of Bartolomé Barrientos's 1567 biography of Pedro Menéndez de Avilés. Translator Anthony Kerrigan provides an interesting introduction to the book that analyzes the histories and characters of both Barrientos and Menéndez. The book is useful for a high school student writing a research paper. 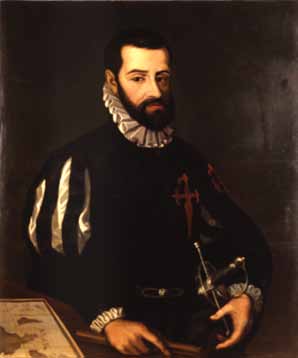 This biography of Pedro Menéndez de Avilés, founder of St. Augustine, describes Menéndez's career from his beginnings as a talented warrior to his colonization of Florida. It is illustrated with maps and depictions of scenes from Menéndez's life. The book would be a good source for a research paper for a high school student.

This is one of the few children's books written about the founder of St. Augustine, Pedro Menéndez de Avilés. The author attempts to describe the controversies surrounding Menéndez, such as his slaughter of the French at Fort Caroline and Matanzas Bay. There are a few factual errors, such as an illustration of Ponce de León captured by Native Americans and an understatement of the French response to Fort Caroline. However, these do not detract too much from the overview about Menéndez.