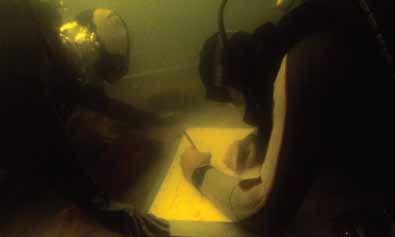 Courtesy of the Florida Division of Historical Resources

Shipwrecks are central to the story of Florida's discovery and colonization. The route of the Spanish treasure ships, called the Plate Fleet, carried vessels up the east coast of Florida via the speedy but treacherous Gulf Stream. Three major fleet disasters occurred in 1622, 1715, and 1733 due to hurricanes that caused many ships to sink. Tristán de Luna's effort to create the first settlement in 1559 was doomed when a hurricane sank most of his ships and supplies within a month of arriving in Pensacola Bay.

This book, which is part of the Images of America series, is filled with photographs of actual shipwrecks and recovered Spanish treasure. It includes shipwrecks that occurred in Florida coastal waters and inland waterways.

Bass, George F. Ships and Shipwrecks of the Americas: A History Based on Underwater Archaeology. New York: Thames and Hudson, 1988.

This is a college-level textbook written by marine archaeologists. It tells the history of America through ships and shipwrecks, beginning with Native American canoes to the steamboat era. The book has more than 376 illustrations, including photographs, maps, diagrams, and paintings. It is suggested for older children with a deep interest in this topic or teachers seeking illustrations to highlight lessons.

Burgess, Robert F., and Carl J. Clausen. Gold, Galleons, and Archaeology: A History of the 1715 Spanish Plate Fleet and the True Story of the Great Florida Treasure Find. Indianapolis: Bobbs-Merrill, 1976.

In 1715, a Spanish treasure fleet sank in a hurricane off the east coast of Florida. This is the paramount book on the discovery of these ships. The wrecks were uncovered in the early 1960s and salvaged by treasure hunters using standards and technology of that time period.

This book is rich in pictures and illustrations. It contains a chapter on the Spanish Treasure Galleons. It does romanticize treasure hunting a bit and should be used in the context of a larger discussion.

This tale begins with the discovery of the remains of the fictitious ship Magdalena off a reef in the Bahamas. What follows is an engaging demonstration of how archaeologists, historians, and scientists piece together the story of the Magdalena.

This is a brief introduction to some of the shipwrecks that have occurred in the waters off Florida's coasts. It includes several of the Plate Fleet wrecks.

Written by Keith Muckelroy, a pioneer of maritime archaeology, this book surveys shipwrecks from around the world. It describes the history of shipping and trade and the development of techniques for excavating, interpreting, and preserving underwater archaeological evidence.

This highly illustrated and colorful book contains basic information about the history of the first boats up to the most modern boats. To the delight of children, several projects are described that illustrate the importance of such things as steering, stability, and how to make a boat float.

This is an excellent introduction to underwater archaeology and the study of shipwrecks. Beginning with a personal account of diving at a shipwreck site, the book describes the work that goes into exploring shipwrecks, recovering and preserving artifacts, researching records and other written material, the technology used, and site preservation. Illustrated with photographs, it also includes a glossary of terms and a list of books and websites for further research.

This book tells the story of the shipwrecks of the early explorers, from the Age of Exploration to the 19th- and 20th-century Arctic and Antarctic expeditions. It draws in the reader by showing how underwater archaeology and research help to reconstruct the story of each vessel, including those of Christopher Columbus, Rene-Robert de La Salle, and Sir John Franklin. Illustrated with portraits and photographs, it also includes a glossary and a list of books and websites.

This maritime atlas is an introduction to the maritime history of Florida, from Native American dugout canoes to present-day maritime travel and industry. It includes maps of harbors, hurricane strikes, ports, wind and ocean currents, and shipwrecks.

This book has objects hidden in the illustrations for the reader to find. Most children should enjoy this book, and it can be used to start a dialogue about shipwrecks, treasure hunting, and underwater archaeology.