La Florida has a long history of forts and settlements, beginning with the doomed settlement attempts of Tristan de Luna in Pensacola in 1559 and the Spanish destruction of France's Fort Caroline at the mouth of the St. Johns River in 1564. The founding of St. Augustine in 1565 created the first permanent settlement in La Florida. 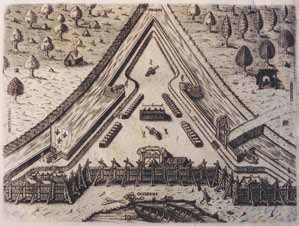 Fort Caroline (Courtesy of the Museum of Florida History)

This book is about Spain's defense network in southern North America from Florida to California. The book emphasizes the use of different building materials by region and provides detailed drawings and photographs of these structures. This is a good source for anyone interested in Spain's New World military strategy.

In 1564, René de Laudonnière established a settlement and fort near the mouth of the St. Johns River. Several Timucua-speaking groups such as the Utina and Saturiwa initially helped the French colonists. Over time, the settlement known as Fort Caroline began to suffer as food stocks dwindled and new provisions failed to arrive from France. The fort was destroyed and most occupants killed during a raid by Pedro Menéndez de Avilés.

The first part of this book is a well-researched history of the French colony of Fort Caroline. In the second part of the book, author Charles Bennett provides translations of French and Spanish letters and other historical documents.

This is Charles Bennett's translation of René Laudonnèire's diary, which describes two of France's attempts to colonize America (Charlesport and Fort Caroline) and his role in those efforts. The book is recommended for young adults who either have a strong interest in this subject or are writing an AP paper.

In 1739, more than 100 people who had escaped from slavery in English colonies in the Carolinas resided in St. Augustine. The Spanish governor of Florida granted permission to establish a new town and fort about two miles north of the city. The settlement was named Gracia Real de Santa Teresa de Mose but referred to as Fort Mose (MO-say). Over the next twenty-five years, Fort Mose and St. Augustine became a haven for Africans seeking liberation from English slavery.

This highly detailed, illustrated work discusses Fort Mose, the first free black community in North America. The authors cover African cultural origins, the origins of African slavery in Europe, and other background material before discussing the foundation of Fort Mose, the history of its people and their daily lives, and the archaeology of the site. The book includes detailed historical engravings, photographs, maps, and diagrams.

This is the fictional tale of Amari, a fifteen-year-old Ashanti slave, and Polly, an indentured servant. After living with the brutality and degradation of life on a southern plantation, a brutal act by the master leads them to run away to Fort Mose.

This scholarly work looks at the complex life of African Americans in Spanish colonial Florida. The Spanish tradition of integration and assimilation provided many former slaves with opportunities that were unheard of elsewhere in the South.

Author Glennette Tilley Turner has written a comprehensive book about Fort Mose, the first free black settlement in America, and Francisco Menendez, an African slave who was appointed by the Spanish governor to be a militia commander. The book follows his life from his birth into the Mandingo tribe, capture, and enslavement in South Carolina, battles with Native Americans in the Yamasee War, and finally his arrival at Fort Mose, where he successfully petitioned for his freedom. By providing details about Menendez, such as his fluency in several languages, the story humanizes colonial slaves. The book contains many archival photos.

Despite previous failures, the Spanish Crown still wished to settle La Florida because it needed outposts to protect shipping. Tristán de Luna y Arellano was charged with establishing three colonies in La Florida. Luna's fleet of eleven ships left Vera Cruz, Mexico, in 1559, carrying 1,500 people, food, livestock, and supplies. The expedition landed at Ochuse (modern Pensacola). Five weeks later, a hurricane destroyed seven ships, all of which were still loaded with food and supplies. This loss dealt such a blow that the colony never took root and survived only two years. The remaining settlers returned to Mexico.

This book is an anthology of articles by historians and archaeologists on the permanent founding of Pensacola in 1698 and the hardships and struggles that ensued. The book would be useful to a student writing a research paper as it contains some hard-to-find materials.

This book is an easy-to-read history of Pensacola from the first European settlement attempt in 1559 to the end of the second Spanish period in 1821. Based on archaeological and historical research, the narrative is illustrated with many large colorful photos and map reproductions.

This is a compilation of scholarly articles written by historians and archaeologists about the First Spanish Period in Pensacola. The book is suited for high school students who are writing a research paper.

Converting native peoples to Catholicism was an integral part of the Spanish colonization strategy. Missions proved to be an effective way to control and influence natives. They also provided a source of support for the capital in St. Augustine, which was strategically important for protecting Spanish treasure fleets returning to Spain along the Florida coast. Mission San Luis in Apalachee Province was critical for Spanish control of the Southeast. Fertile land and abundant population enabled the mission to provide provisions and labor.

This book provides an excellent overview of the Spanish Catholic presence in the modern United States. It describes the general layout of the missions, their differing architectural styles by region, and is illustrated with the authorâ€™s photographs of mission sites across the U.S.

This book brings to life the Apalachee Indians of northwest Florida and the Spanish mission of San Luis. Based on archaeological and historical records, this book is well-researched and easy to read. It is also filled with artwork recreating scenes from everyday life at the mission.

This book briefly introduces the Spanish mission system to children. It explains the political and religious significance of the system as well as the military implications.

St. Augustine, the oldest continuously occupied European city in the United States, was founded in 1565 by Spanish explorer and mariner Pedro Meniéndez de Avilés. This was an ideal location for Spaniards to oversee the protection of the treasure fleets that sailed up the Gulf Stream before crossing the Atlantic. St. Augustine also guarded La Florida against incursions by the French and English. Spain ruled La Florida for the next 200 years until handing it over to the British in 1763. British rule only lasted for twenty years, and Spain again held Florida until it was ceded to the United States in 1821.

This book is an illustrated introduction to St. Augustine and its history. This is a good choice for younger readers.

We follow Luissa, Diego, and Junco as they seek refuge at Castillo de San Marcos during the British siege of 1702. This engaging tale brings the history to life for the reader.

This book is a vivid retelling of Spain's early failed attempts to establish colonies in the Americas before the founding of St. Augustine by Pedro Menéndez de Avilés in 1565. The story is well-researched, based on modern scholarship, and is written in an engaging manner that draws the reader into the story.

This book covers the history of St. Augustine from its founding in 1565 to the present day. This look at the city's history also explores much of the history of Florida and the United States. While it covers 25 major historical events, it also provides a history of what the lives of St. Augustine inhabitants were like over time. It is illustrated with archival photos, current pictures of the city, and historical reenactors.