When Europeans arrived in the New World, they encountered the Taíno Indians, who inhabited the northern islands of the Caribbean, including the Bahamas and the Greater Antilles. The Carib Indians inhabited the Lesser Antilles. Both populations had migrated northward from South America along the Caribbean island chain well before the arrival of Europeans. Historians and archaeologists believe that the Taínos were a relatively peaceful population, while the Caribs were more aggressive. Because the Taínos lived in areas initially explored and settled by Europeans, they were the first native peoples to be affected by European demands to provide labor, accept Catholicism, and submit to the authority of Spanish crown.

Morning Girl and her brother Star Boy are native children growing up on an idyllic island in the Caribbean. The story focuses primarily on life for the Taíno people before Columbus, although it does briefly introduce the explorer's arrival toward the end of the book.

This book tells the history of the Taíno people, from their early origins to their near-destruction at the hands of Spanish explorers and colonists.

This vividly illustrated book tells the story of Columbus's arrival through the eyes of a young Taíno boy and how this event changed the Taíno people forever.

Native Americans of Florida and the Southeast

Perhaps 350,000 to one million American Indian people lived in Florida in the early 1500s. These people shared some characteristics, such as how their societies were organized, their basic spiritual beliefs, and their participation in trade. In other ways, they were different. They spoke many different languages, ate different foods, and had varying levels of political complexity. Florida's native people were impacted severely by European colonization beginning in the 1500s. By the late 1700s, some native cultures had perished, while others merged with newly arrived Indians and non-Indian people or migrated elsewhere. All natives experienced major changes in their traditional ways of life.

Aveni, Anthony F., and S. D. Nelson. The First Americans: The Story of Where They Came from and Who They Became. New York: Scholastic Nonfiction, 2005.

The illustrations in this book highlight the lifestyles of Native Americans prior to their exposure to conquistadors and settlers. The author includes a brief synopsis of what happened to these populations after the arrival of Europeans.

This brightly illustrated book describes the prehistory and colonial history of Florida, with chapters focusing on first contact, early explorers, and early settlements.

A brief overview of Native Americans in the Southeast, this book focuses primarily on events following Spanish and French settlement. It is best suited for older or very motivated readers because of the long sentence construction and lengthy paragraphs; however, some of the beautiful illustrations could be used with lessons for younger children.

This is a comprehensive book about Native Americans in Florida. It begins with Florida's first people and continues to the present. The history of native populations is placed in context with maps and illustrations.

This well-illustrated book provides an overview of the history of native peoples in Florida. It is divided into three sections that explore basic concepts such as archaeology, language, and reservations; time periods, from Paleoindian to the 20th century; and specific Florida tribes. It also includes a Native American Heritage Trail of archaeological and historic sites.

This illustrated book presents an overview of Native Americans of the southeastern United States. It covers daily life, agriculture, architecture, ritual, and the history of native peoples into the 20th century.

An excellent resource for the history of Native Americans, this book clearly describes the interaction between explorers and native populations and the resulting impact. Younger readers may find the timeline running along the bottom of the pages and the fabulous illustrations to be of more interest than the detailed explanations.

Following the story of a Timucuan boy, Tenerife, as he travels across Florida, this book describes the daily life of Indians in Florida. Along his journey, Tenerife meets members of the Calusa and Apalachee tribes. The fictionalized account is interwoven with factual chapters that include maps and archaeological evidence about native tribes and glossary words in bold.

The Calusa Indians were the dominant people in southwest Florida when Juan Ponce de León visited the region in 1513. Their capital, a village with mounds and canals, was located on Mound Key. The Calusa were the most populous, politically complex, and influential of the south Florida native groups. They lived in a structured society where the chief, his family, and other elites held the highest rank. Beneath them were commoners and slaves. Some slaves were Spaniards captured from shipwrecks.

MacMahon, Darcie A., and William H. Marquardt. The Calusa and Their Legacy: South Florida People and Their Environments. Gainesville: University Press of Florida, 2004.

This book begins with an in-depth look at the ecosystems that enabled the Calusa to thrive, including mudflats, sea grass beds, and mangrove forests. Although the Calusa disappeared in the 1700s, their fishing traditions survive among the modern coastal dwellers, including the Seminole and Miccosukee. The authors emphasize the need to protect the estuarine ecosystems that were so important to the Calusa from overdevelopment and environmental degradation. 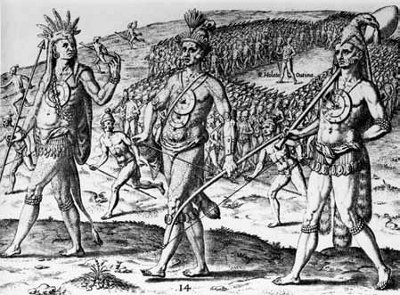 Timucuan Warriors (Courtesy of the State Archives of Florida)

At least twenty-five tribes, such as the Potano, Ocale, and Saturiwa, occupied the St. Johns region. Although they spoke dialects of the Timucua language and shared other cultural traits, they were not a single unified group. In fact, some groups occasionally engaged in warfare with each other.

This is an interactive detective book about the history of the Tímucua Indians. Readers are challenged to solve more than forty mysteries dealing with different aspects of Tímucuan life.