Europe and the Age of Discovery 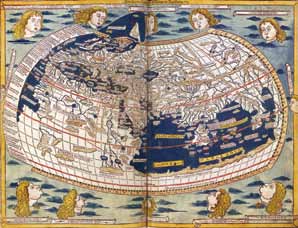 (In [Donnus Nicolaus Germanus] Cosmographia, Claudius Ptolemaeus, Ulm, 1482; courtesy of the Rare Book Division of the Library of Congress)

This selection of books reviews the cultural contexts and global perspectives that gave rise to the Age of Discovery, 1450–1650, and the waterborne migrations that changed the course of history.

Aronson, Marc, and John W. Glenn. The World Made New: Why the Age of Exploration Happened and How It Changed the World. Washington, D.C.: National Geographic Children's Books, 2007.

This is a beautifully illustrated account of the Age of Exploration. The book contains timelines, maps, and artwork that help to detail the motivations for and consequences of the exploration and settlement of the Americas

This large volume is divided into short, readable chapters. It explores the life and times of Christopher Columbus and his sons from 1451 to 1539 and uses other individuals and events to place the discovery of the New World into the greater context of world history.

This book presents an overview of the world in 1492, including Europe, Asia, Africa, Australia, Oceania, and the Americas in their own illustrated chapters. It does an excellent job of placing Europe within the context of world history.

This general book about exploration is packed with illustrations of explorers through time. The two-page sections contain maps detailing where explorers traveled, photos of artifacts relating to the expeditions, and the types of ships and navigational tools used. This is a great book for children and visual learners.

This book does an excellent job of placing Columbus's 1492 voyage in historical context. Written in the present tense, it uses imaginary characters to explore what was going on in Europe and the Ottoman Empire. The reader is introduced to New World characters, including the Taínos of the Caribbean; the Mayans, Incans, Aztecs of Mexico; and other native tribes in North America. The book is beautifully illustrated by the author's artwork.

On his 1492 voyage seeking a new trade route to the Far East, Christopher Columbus came upon islands and people that were unknown to Europeans. He claimed these lands for Spain. His journey opened the door to exchanges of people, ideas, plants, animals, and diseases between the Americas, Europe, and Africa that changed the world forever.

Simple text and bold illustrations combine to make this book a great introductory nonfiction biography. It is ideal for beginning readers or reading aloud. The story is a brief account of Columbus's discovery of the Americas, with a central message of perseverance.

This illustrated book is a biography of Christopher Columbus and is written in an engaging and personal style that young readers will enjoy.

Author Jean Fritz provides an easy-to-read history of Columbus's discovery of the New World, although she omits some of the darker episodes, such as the exploitation of native peoples. The book is beautifully illustrated by artist Tomie DePaola. Because of its delicate pop-up construction, it is best suited for reading to a class, rather than circulating it. 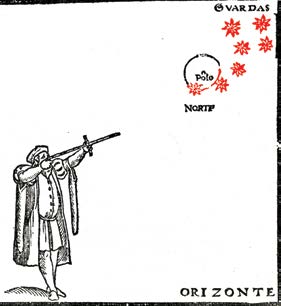 This well-illustrated book puts the reader in the role of a ten-year-old boy setting out to sea on Columbus's first voyage. It is full of humor about the trials of an early ocean voyage, but still educational and engaging. Each section begins with a question and encourages active reading. It also contains a glossary and index.

The strength of this book lies not in its summary of Columbus's life and four voyages, but in the author's review of Columbus's legacy as reflected in the historical record. By describing how historians, authors, and others have used primary and secondary sources to interpret, explain, or question all aspects of the explorer's life, the author provides an excellent model of how history is reconstructed.

This book places the life of Christopher Columbus in a historical and technological framework. Well illustrated, this volume includes many insets with information about the different cultures and important people of the time. A glossary, timeline, maps of Columbus's expeditions, and suggestions for further reading are included.

Based on Columbus's journal from his first voyage, this children's version is very accessible. The firsthand account offers insight into Columbus's personality and motivation, the hardships of the voyage, and the discovery of new peoples, plants, and animals. Peter Hanson's colored, cross-hatch drawings were created specifically to go with the journal.

This book offers a well-balanced account of Christopher Columbus's voyages to the New World. It is illustrated with works of art inspired by the explorer's discoveries, including a 1493 woodcut that is the earliest depiction of Columbus's landing in America. Quotes from his journals are woven throughout the text.

This brightly colored graphic novel about Christopher Columbus has anthropomorphic characters including mice, cats, and foxes. Several rascally cat pirates take a time machine back to Columbus's voyage, and the main character mouse, Geronimo Stilton, and his friends must follow them to make sure they do not change the timeline of history. The novel, which is very attractive to small children, is full of cartoon humor and lots of cheese references.

Strong, Stacie. The Voyage of Columbus in His Own Words. Chicago: Sears, Roebuck, and Company, 1991.

This colorful book is filled with large pop-up pictures that have interactive parts. The text gives a history of Columbus's first voyage and includes entries from the explorer's own journal. 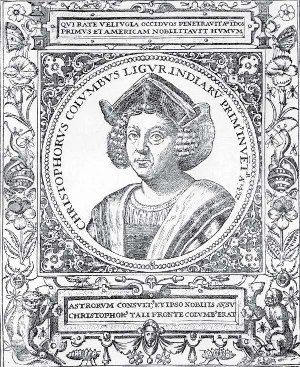 (Print of an engraving by J.-A.-J. DeBry of Christopher Columbus Courtesy of the Florida Memory Project)

This is a well-illustrated book written in the graphic style, which draws even the most reluctant reader into the story. Beginning with Columbus's early life in Genoa, the novel reviews his four New World voyages and discusses his influence on other explorers. The book includes an index, glossary, and suggestions for further reading.

The dark and dramatic illustrations in this action-packed graphic novel about the life and adventures of Christopher Columbus will draw in even reluctant readers. The story highlights Columbus's struggles for King Ferdinand and Queen Isabella's support and his interaction with Native Americans. The book includes an index, glossary, further reading, and Internet sites.