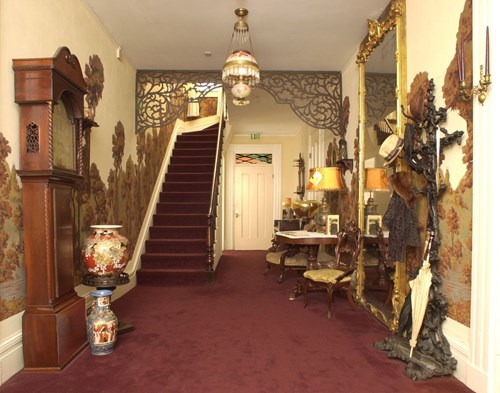 This ornately furnished hall is part of the original 1843 house, which consisted of two rooms on each level and a side hall. Later construction doubled the size of the house to create a home with a central hall. In an unpublished manuscript, Luella Knott wrote that she and William got “what we like best in a home – an old house with hall running through the center and two rooms on each side, upstairs and down, an ‘L’ on the back and wide porches.”

Mrs. Knott installed the expensive French wallpaper that lines the walls of the hall. Ever frugal, she applied it sparingly, stopping it a few inches above the molding and placing it around the pier mirror, but not behind. Instead of extending it to the back of the hall, she used a folding screen to block the back section so that visitors could not tell where the wallpaper ended.

Society page accounts of events that Mrs. Knott hosted sometimes noted the hall and its pier mirror. One article reported, “A gold edged mirror which extends from the ceiling to the floor in the reception hall of the home, reflected the magnificence of the scene, which was softly lighted by the many type lamps.” Another article described the hall as “warm and welcoming,” and pointed out the “full length mirror reflecting the welcome that Mrs. Knott extended to the honoree and her guests.” The ceiling was not quite tall enough to fit the mirror, but that did not deter Mrs. Knott. Instead, she had it cut down to fit the space. This elegant mirror and many other antiques that filled the home during the Knott’s lifetime furnish the museum today. 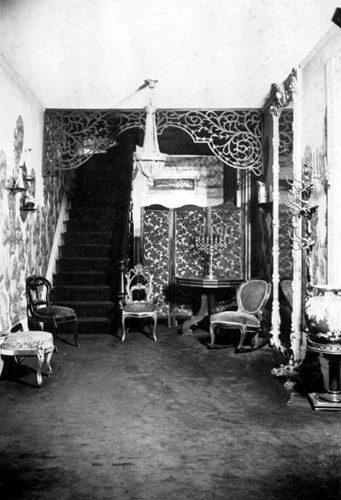 A folding screen blocks the back section of the hall, ca. 1935
Knott House Museum collection