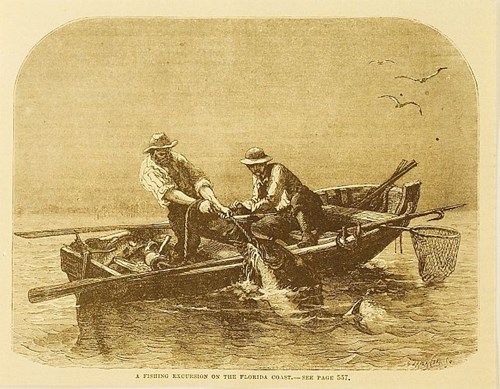 “A Fishing Excursion on the Florida Coast,”
Frank Leslie’s Sunday Magazine, 1880
In the collections of the Museum of Florida History

Word began to spread about Florida fishing in the mid-nineteenth century. Naval vessels and ships carrying passengers and mail sailed down the east coast of the country to Key West, Cuba, and beyond. During stops along the Florida coast, crewmen spent their spare time fishing. They were amazed by the vast numbers and types of fish that they found. After returning north, they told stories of their fishing experiences in Florida waters.

After the Civil War, books about hunting and fishing became popular. In the 1870s and 1880s, many sporting and outdoors-themed journals began publication, including American Sportsman, Forest and Stream, Field and Stream, and American Angler, the first magazine focused entirely on angling. They, too, reported on the wonders of Florida fishing, and sportsmen—and some women—started coming to the state to fish.

Visiting anglers also brought attention to Florida’s fishing bounty through books they wrote about their excursions in the state. Stories of fishing trips appeared in newspapers such as
The New York Times. Books and articles helped to popularize Florida as a “Sportsman’s Paradise.” 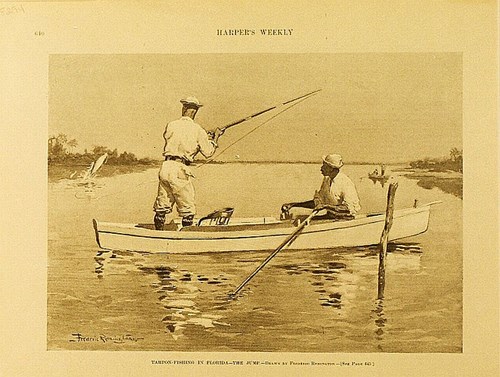 “Tarpon Fishing in Florida – The Jump,” by Frederick Remington
Harper’s Weekly, 1897
In the collections of the Museum of Florida History

Travel to and around Florida was difficult during much of the nineteenth century, and few lodgings existed for travelers. As transportation and accommodations improved, more people began visiting the state to improve their health and for recreation. These early tourists went by train or steamship to Jacksonville. From Jacksonville, a series of short line railroads and smaller steamships took travelers farther south.

Some tourists aimed for central Florida or areas along the St. Johns River to engage in freshwater fishing. Others went south to the coasts for saltwater fishing, and some continued to the Everglades. Henry Flagler’s Florida East Coast Railroad reached Miami in 1896 and Key West in 1912, providing more convenient access to prime fishing grounds. 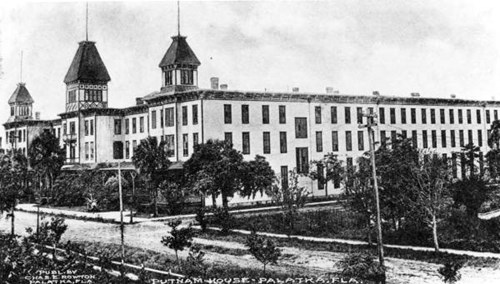 Putnam House, ca. 1890s
Freshwater fishers could vacation at Florida’s inland resorts, which offered fishing excursions to nearby rivers and lakes. The Putnam House in Palatka advertised opportunities for bass fishing on the St. Johns River. Florida’s freshwaters have long been famed for their bass fishing.
Courtesy of the State Archives of Florida 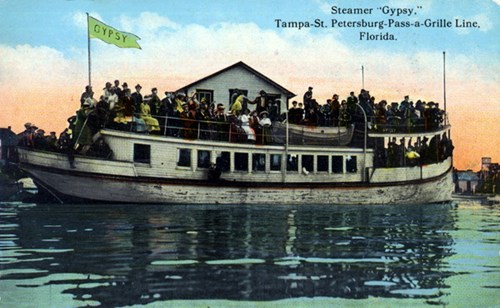 William Aiken Walker (1838–1921) was a noted Southern artist, born in Charleston, South Carolina. He traveled throughout the South, painting scenes of rural life. From 1889 to 1920, he wintered in Florida and stayed for a season at the artists’ studios at Henry Flagler’s Ponce de León Hotel in St. Augustine. He later spent many winters at Ponce Park near Daytona Beach. In 1899, during a cruise along Florida’s east coast, he sketched scenes of the coastline at the beginning of the state’s building boom, documenting the early development of the state. Walker was an avid fisherman and outdoorsman and painted images of many kinds of game fish, including the ones shown here.

These paintings were found at Wakulla Springs State Park in a box addressed to Edward Ball and sent from the Pacetti Boarding House in Ponce Park. The box was marked for shipping to the Chicago World’s Fair, held in 1933. Ball was one of the organizers of the Fair’s Florida Pavilion, suggesting that the paintings may have been shown there. The State purchased Wakulla Springs from Ball in 1986. The Department of Environmental Protection, which operates the park, transferred the paintings to the Museum of Florida History in 2006.