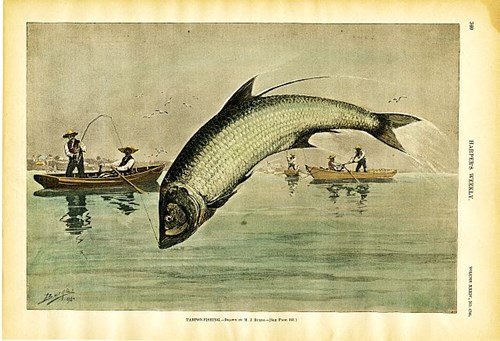 “Tarpon fishing,” by M. J. Burns
Harper’s Weekly, 1890
In the collections of the Museum of Florida History

The requisites to success in tarpon-fishing are a favorable locality, hot weather, warm water, infinite patience, plenty of endurance, coolness, skill, a good guide, carefully selected tackle, and a knowledge of how to use it.
—“Tarpon Days,” Harper’s Weekly, June 26, 1897

In 1885, Forest and Stream reported that Mr. W. H. Wood of New York City had captured a tarpon using rod and reel on the southwest coast of Florida. It was the first widely publicized account of tarpon taken in this manner. Previous captures had been made by harpoon. The story sparked a tarpon craze that helped spur the saltwater sport fishing industry in the state.

The tarpon, dubbed the “Silver King,” was the first major game fish sought in Florida waters. It had a reputation as a fierce fighter. By the end of the century, tarpon fishing was drawing large numbers of tourists to Florida. The southwest coast was the first center of tarpon fishing in Florida. As the East Coast Railway extended down the southeast coast, anglers increasingly headed for the Palm Beach area, Miami, and the Keys. 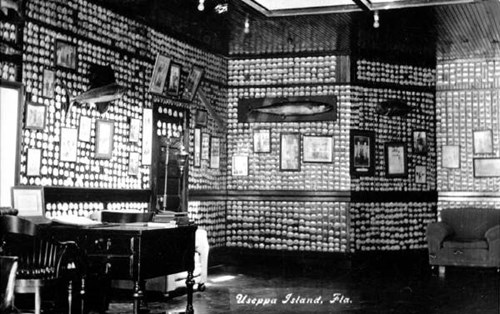 Izaak Walton Club walls decorated with tarpon scales, ca. 1920s
The Izaak Walton Club began in the early 1900s on Useppa Island, in southwest Florida. It developed into one of the most prominent fishing groups in the country. Anglers removed one scale before freeing a tarpon. Scales were dried and labeled with the weight, place, date, and angler’s name and displayed on the walls. The club was named for Izaak Walton, who wrote              The Compleat Angler. First published in 1653, it became a fishing classic.
Courtesy of the State Archives of Florida

We left home manicured and soft-handed, we are returning with calloused hands, fingers bruised, burned and rugged. Any one seeing us would not doubt we had put in a month of good, hard, but pleasurable work.

The tarpon appealed to sportsmen of the late nineteenth and early twentieth centuries because they sought the challenge of facing the powerful fighter. Most anglers came from the Northeast or Midwest, but some came from Europe. They usually were male, from a large city, and often were members of hunting and fishing clubs. Typically wealthy, they could afford to hire a guide, rent a boat, buy supplies, and sometimes spend months on a fishing vacation. Though a heavily male-dominated activity, some women did try their hand at hunting the “Silver King.” 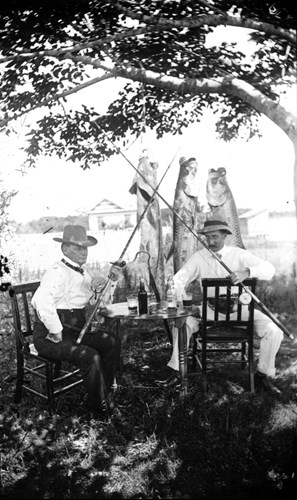 Celebrating their tarpon catch, Sarasota, ca. 1903
Tarpon fishing involved both competition and companionship. Sportsmen enjoyed the rivalry among anglers and boasted of their adventures, losses, and successes.
Courtesy of the State Archives of Florida 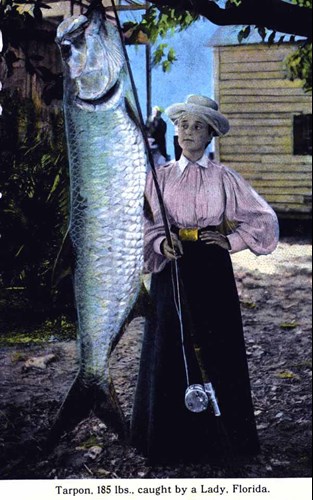 Florida Schultz Heitman with tarpon, ca. 1901–15
Courtesy of the State Archives of Florida

We have a graveyard in which we deposited the tarpon which were not intended for mounting, located at a point on the beach, for tarpon are not very good to eat.

Early anglers commonly hired a guide to take them to the fishing grounds. The guide rowed the angler to a site in a small boat called a skiff. When they arrived, the angler then slowly and continually dragged the fishing line behind the boat in an attempt to get a fish to strike the bait in a method known as trolling. Once the angler hooked his catch, he fought the fish until the tarpon was exhausted. The guide then rowed the boat to shore and landed the fish with a gaff, a large hook on a pole. Hotels kept records of tarpon caught, and some awarded trophies for those who caught the largest or most fish.

Men of the period wanted to be fair sportsmen, but many also believed that a true sportsman had to kill his prize. Anglers destroyed hundreds of tarpon every year. Even in the early 1900s, some noted the waste of tarpon as so many were killed, brought back to land, weighed, and discarded. A 1902 account by Englishman J. Turner-Turner warned that with so many sportsmen engaged in the tarpon craze, “the fishery could not continue at that pace indefinitely.” 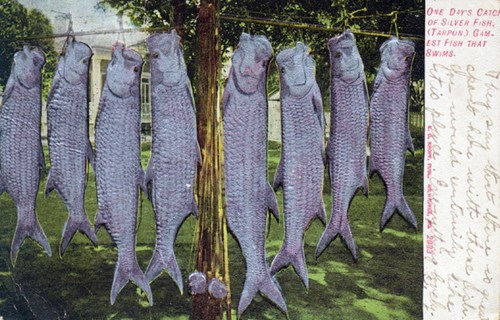 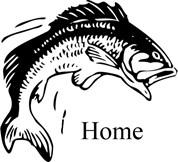