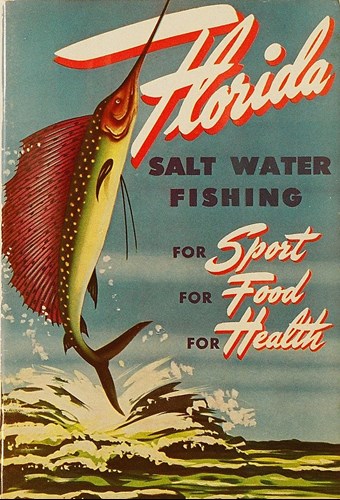 Florida Saltwater Fishing booklet, 1953
In the collections of the Museum of Florida History

As more tourists trekked to Florida in pursuit of the tarpon, they discovered other large game fish. The sailfish was the next to become popular and by the 1910s, sailfishing had gotten underway in earnest. Anglers also hooked such ocean fish as barracuda and king mackerel. The boom years of Florida sport fishing were just beginning.

The earliest fishing tourists aimed for the southwest or southeast coasts of Florida. As the number of anglers grew, fishermen found that the coast of northeast Florida also provided fruitful fishing grounds. By the 1950s, St. Augustine and Daytona, which had always drawn some sport fishers, increasingly attracted anglers during the summer season. Sport fishers also visited Destin, Pensacola, Panama City Beach, and other areas in the Panhandle. 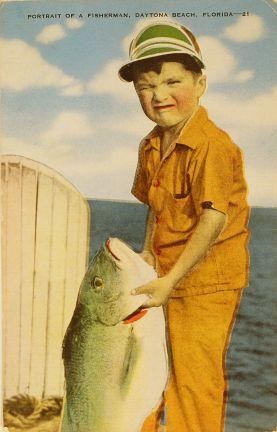 “Portrait of a Fisherman, Daytona Beach, Florida,” ca. 1945–55
Postcard in the collections of the Museum of Florida History

The rising popularity of deep sea fishing led to the development of specialized tackle to handle large saltwater fish. Early reels consisted of little more than a basic spool and the line wound around it. When a fish bit, the spool unwound rapidly. In the late nineteenth century, the leather thumb brake was added to the reel to keep the reel from freely spinning when the angler hooked a fish. Early in the next century, the star drag came into use. The angler turned a star-shaped wheel beneath the reel handle to reduce or increase pressure on the line.

Early anglers experienced line breakage and other problems because of unsuitable gear. They turned to heavier lines for many fish, but heavier lines required large reels. By the mid-1930s, anglers were using large reels with thick linen line and sturdy rods. They could catch more game fish using the heavy tackle, but it required little skill. By the end of the decade, some sport fishers were urging the use of lighter tackle, which provided a more even competition between fish and angler.

Fishing rods consisted of solid wood until the introduction of split bamboo in the nineteenth century. Split bamboo consists of strips of bamboo glued or laminated together. Fiberglass rods appeared on the market in the 1940s. The first fiberglass rods broke easily, but manufacturers made improvements in the 1950s. By the 1970s, graphite had become a popular rod material. Some rods are composed of several different materials. Bamboo is still used today, as well. 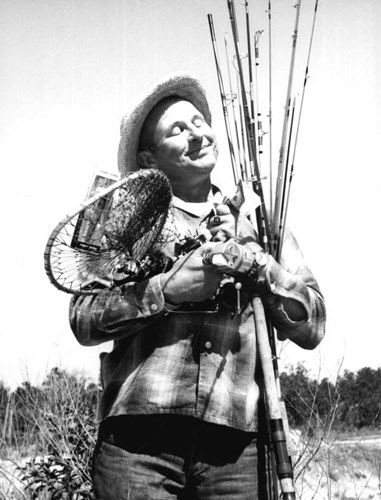 Man with fishing gear, 1962
Courtesy of the State Archives of Florida 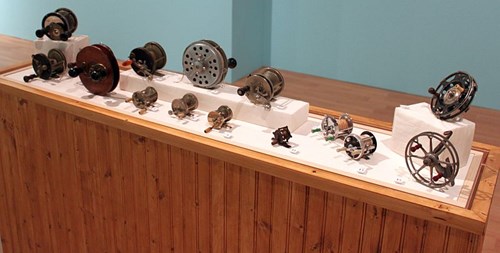 Collection of reels
The Lure of Florida Fishing exhibit, 2014

Reels, line, and line dryer.
The line dryer is the large object at the left. Before the introduction of nylon, fishing line
was made of cotton, linen, or silk. Anglers had to remove the fishing line from the spool and
dry it out after use. They wrapped their damp line around a line dryer to dry it.
The Lure of Florida Fishing exhibit, 2014 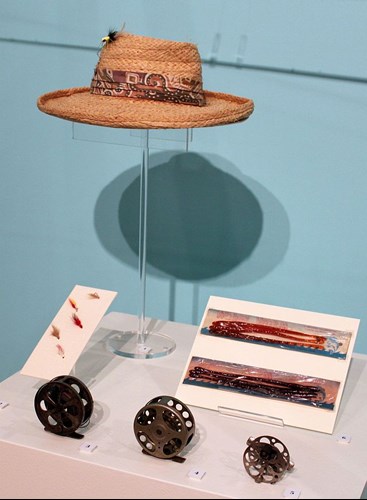 Charter boats have taken tourists to the Gulf Stream for deep sea fishing adventures since the early twentieth century. In the 1930s, the waters off the island of Bimini in the Bahamas were found to be teeming with fish. By the end of the decade, many charter boats from Florida’s east coast were carrying sport fishers to the rich fishing grounds of Bimini and nearby Cat Cay. As the number of charter boats increased, more anglers were opting to search for big game fish in deep water.

Miami, the Palm Beaches, and Key West were centers of charter boat fishing. In Miami, charter boat docks included the famed Pier 5 and Baker’s Haulover. However, charter boats operated up and down both coasts. The northern Gulf Coast also harbored many charter boats. In Destin, boats have been taking anglers on fishing excursions in the Gulf of Mexico since the late 1930s. Commercial fishing boats converted to carry sport fishers served as Destin’s earliest charter boats. They were known as “boats for hire.” 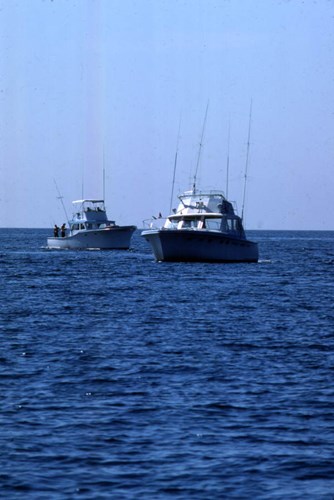 Charter boats near Destin, 1977
Courtesy of the State Archives of Florida 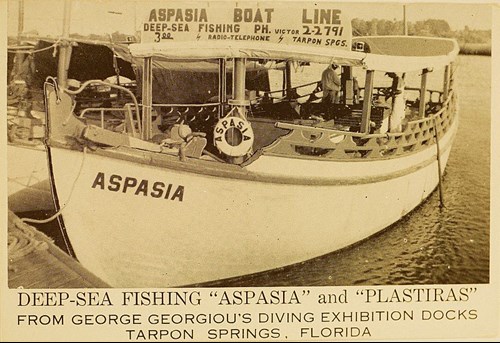 The party boat Aspasia, Tarpon Springs, ca. 1945–60
Some anglers joined a party boat, also called bottom boat, which was a large vessel that carried many people on deep sea fishing excursions.
Postcard in the collections of the Museum of Florida History 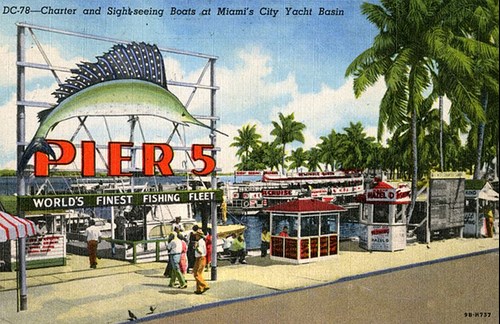 Pier 5, Miami, 1949
Pier 5 became a hub for leading charter boat captains to meet, discuss, and develop new fishing techniques. It was a local landmark and one of Miami’s top tourist attractions. Badly damaged several times by hurricanes, Pier 5 finally closed. Today, an outdoor shopping center stands on the site.
Courtesy of the State Archives of Florida

By the late 1930s, many tourists were making yearly trips to Florida for the fishing. They chartered boats to take them on deep sea fishing excursions, dropped a line in the flats, or fished from piers, bridges, and beaches. Freshwater anglers visited the many lakes, rivers, and streams throughout Florida.

Angling was becoming big news. The state’s newspapers frequently reported on fishing events. The national wire services also carried angling updates and publicized the feats of well-known anglers. There were annual competitions, celebrity anglers, and in 1939, a new governing body—the International Game Fish Association—formed to promote uniform and ethical standards for sport fishers who sought to establish a record for the capture of large game fish. The catch-and-release movement began to grow, but was not yet widespread. 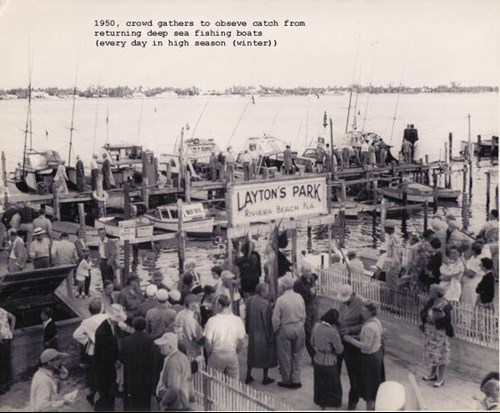 Crowd gathers to watch returning boats, Layton’s Park, Riviera Beach, 1950
Tourists and locals gathered daily at the docks to watch the charter boats come in with their catches.
Courtesy of the State Archives of Florida 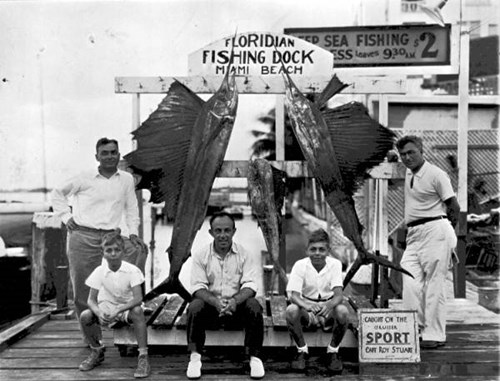 Posing with their catch, Miami Beach, 1934
Dockside photographers awaited the return of the charter boats, ready to snap pictures of successful anglers with their catches. The photos served as mementos of a Florida vacation.
Courtesy of the State Archives of Florida 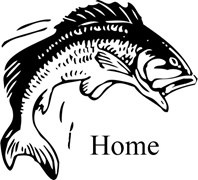