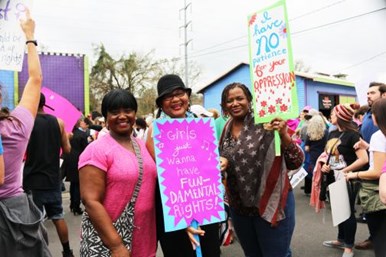 The exhibit concludes with a brief look at women’s activism today. Though methods have changed, women are still advocating for change in numerous areas, from the environment to fighting drunk driving, for better education, and much more. Florida’s women activists are continuing—and expanding upon—a tradition of fighting for equality and working to improve society that began more than a century ago. Learn more about the history of Florida women’s activism and the women who advocated for the causes important to them by visiting Beyond the Vote, on display through 2021.

On January 21, 2017, the first Women’s March took place in Washington, D.C., with numerous sister marches in cities around the country, including in cities around Florida. It was meant as a call for social change. This image is from the march that took place in Tallahassee. (Courtesy of the State Archives of Florida)