The women’s rights movement in the United States began in 1848 when a group of women and men met in Seneca Falls, New York, to discuss the status of women. The group called for the right to vote for women. At the time, it was a radical idea. The decades-long fight for the vote included lobbying politicians, speeches, marches, and even imprisonment for some suffragists. 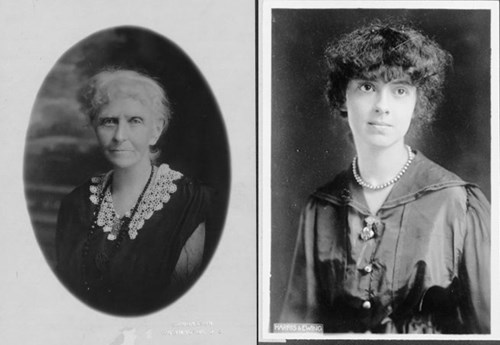 At the age of 73, Mary Nolan was the oldest person arrested and jailed for picketing
for suffrage in front of the White House, in demonstrations organized by the NWP.

Helen Hunt West, a journalist for the Jacksonville Times Union newspaper and a self-taught
lawyer, became state chair of the NWP and later an officer at the national level.

(Photos courtesy of the Library of Congress Prints and Photographs Division)

Suffrage organizations produced many buttons to promote the cause.
Leading Florida feminist Roxcy Bolton took these buttons to meetings
of women’s rights groups, and later displayed them in her home in
South Florida. She used them to inspire other women.

Anti-suffrage sentiment remained strong through much of the suffrage movement. Resistance came from industry
and liquor interests, some white clubwomen who believed that women’s clubs had more influence
without the vote, and those who wanted the states to decide who could vote, not the federal government.
In the South, suffrage opponents feared the Black vote and thought a federal women’s suffrage amendment
might interfere with state laws that disenfranchised Black male voters. Some Southerners viewed women as above
what they considered the masculine world of politics and felt the vote would taint them.

(Collection of the Museum of Florida History )