In the early 1900s, Florida women were also advocating for environmental issues such as bird protection, forest preservation, and saving slices of Florida wilderness. At the time, women’s hats decorated with bird feathers were highly fashionable, and hunters were decimating bird populations to get the feathers. The Florida Audubon Society (FAS), which included men and women, formed in 1900 to fight the destruction. Women were highly active in the FAS. As damage to forests became more apparent in the early 1900s, women also urged better management of forest resources. They lobbied politicians, planted trees, and wrote publications to bring attention to forest destruction. Their efforts led to the state’s first forest reserves.

Women also worked for Everglades protection. The Florida Federation of Women’s Clubs lobbied for the creation of Royal Palm State Park in the Everglades. When Everglades National Park opened in 1947, with support from women, it incorporated Royal Palm. The same year, Marjory Stoneman Douglas’s book The Everglades: River of Grass was published. The book helped to change public perception of the Everglades as a piece of worthless swampland into an important and unique ecosystem. As problems in the wetlands continued and as scientific knowledge increased, a new fight developed to protect the Everglades. 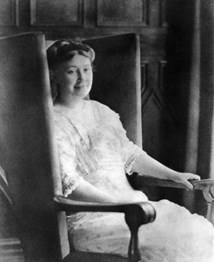 One of the state’s most influential women, May Mann Jennings was the wife of a former
Florida governor, and president of the Florida Federation of Women’s Clubs
from 1914 to 1917. She worked for forest protection, lobbied for the creation
of Royal Palm State Park, and advocated for a national Everglades Park. 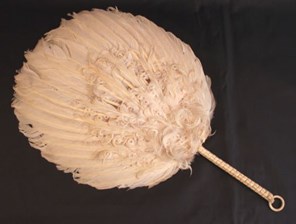 Fan of egret or heron feathers

Hunters especially sought feathers from birds such as
ibises, egrets and herons, known for their beautiful plumage.