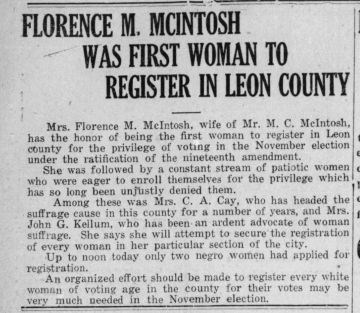 As soon as women gained the vote, Black women had to fight to keep it. As Black women organized to register to vote in the South, they faced hostility and harassment. African Americans in Jacksonville had begun a voter registration drive in 1919 that transformed into a statewide movement. Black women participated in the drive, which continued after suffrage passed. Despite attempts by some officials to keep them from registering, thousands of Black women registered to vote. During the 1920 presidential election, election-related violence was so extreme it ended attempts by Black communities in some areas of Florida to organize politically. Still, Black women and men continued to fight for their right to vote, until passage of the 1965 Voting Rights Act enabled disenfranchised African Americans to regain access to the ballot box.