The Second World War had an enormous impact on the State of Florida. Few, if any other states were as directly affected by the war. Thousands of the state's sons and daughters served in combat theaters around the world while in Florida dozens of military bases were established or expanded. The war also spurred economic development and led to a huge postwar population surge. It can be argued that World War II marked the coming of age of Florida as a modern, influential state.

Despite the land boom of the 1920s, in many respects Florida was still a sleepy southern state in 1941. On Pearl Harbor Day, December 7, 1941, when Floridians learned that the United States had been thrown into the world conflict that had been raging for over two years, most of the state's population lived in rural, agricultural regions with little industry of any consequence.

The war brought dramatic changes. A tremendous migration of military personnel into the area took place. Additionally, civilian workers came to work in the various camps and bases that were established, and in the shipyards and other industries that expanded during the conflict. Many soldiers, sailors and marines who served in Florida later returned to the state to live. The state's population grew 46.1% during the decade of the 1940s, and would expand at an even more rapid pace during the 1950s. World War II helped serve as a catalyst for the state's explosive postwar growth. 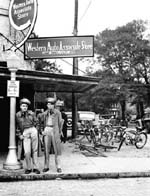 Florida's strategic location made the state vital for national defense, and dozens of military installations were activated before and during the war. Planes and ships from Florida's bases helped protect the sea lanes in the Atlantic Ocean, Gulf of Mexico and the Caribbean. Florida was viewed as an important first line of defense for the southern United States, the Caribbean Basin, and the Panama Canal. The defense industry also grew dramatically during the war. Equipment and supplies necessary to conduct the war were produced in the state, such as the Liberty Ships that were built by Tampa Shipbuilding, the Wainwright Shipyards in Panama City, as well as shipyards at Pensacola and Jacksonville. "Alligator" amphibious vehicles were designed and produced at Dunnedin. Agriculture, however, remained Florida's primary economic contribution to the war effort. The U.S. Department of Agriculture authorized the temporary importation of 75,000 Bahamians and Jamaicans to work in south Florida fields.

Many Floridians were still recovering from the Great Depression, and World War II presented economic opportunities. Wages improved and jobs became plentiful due to the large number of men in service. Women, blacks and Hispanics moved into professions previously dominated by white males. Despite some friction, race relations were relatively peaceful during the war, as black Americans in particular worked toward the "Double V" victory abroad against fascism and victory at home against racial prejudice.

Florida's tourist industry was initially hurt by restrictions on travel, particularly during the early years of the war. To compensate for the loss of tourist dollars, however, the military took over hotels for use as barracks and restaurants as mess halls. By April 1942, for example, 70,000 hotel rooms on Miami Beach were used by trainees attending various service schools run by the Army Air Corps. Later in the war the tourist trade returned, with Florida promoting itself as a vacation getaway for hard working, and now highly paid, civilian workers. "Like a soldier YOU need a civilian furlough," claimed the Daytona Chamber of Commerce, while Miami promoted the idea that one could "Rest faster here."(1) Consequently, in 1943 tourism in Florida increased by 20% over the previous year, and gambling at south Florida racetracks reached all-time highs. Florida's promotion of its tourist industry during the latter stages of the war drew criticisms in some quarters for its inappropriateness during a period of national sacrifice.

Perhaps the most dramatic impact of the war on Florida was the many military bases established throughout the state. Even before the outbreak of fighting, new installations were built to house the prewar defense buildup. For the army, Camp Blanding near Starke became one of the largest training bases in the southeastern United States, with nine entire army divisions and many independent units passing through its facilities. Later in the war, Camp Blanding served as an Infantry Replacement Center, training thousands of individual soldiers for combat duty. Other major bases included Eglin Field near Pensacola where Jimmy Doolittle's bombers trained before their dramatic 1942 raid on Japan; Drew and McDill airfields at Tampa; Dale Mabry Field at Tallahassee, where the famous, all-black, 99th Fighter Squadron trained; the naval bases at Pensacola, Jacksonville, Key West, Miami and Ft. Pierce; and Camp Gordon Johnston at Carrabelle, which was the Army's major amphibious training center. By 1943 approximately 172 military installations of varying sizes were in existence in Florida, compared to only eight in 1940.