Support for the Union cause took several forms in Florida. At the time Florida left the Union, some prominent citizens argued that it was a grave mistake. An existing loyalty to the Union continued among some citizens. Business people and merchants who relied on northern trade feared a disruption of commerce. Subsistence farmers and cattle grazers in some rural areas often were more concerned with supporting their families than with the political issues of the North or South. Moves by the Confederate government to forcibly draft these men or to confiscate parts of their herds or crops turned some against the Confederate cause.

Floridians who supported the Union sometimes were forced to leave their homes and flee as refugees to coastal towns in Florida that were occupied by federal troops. Union authorities organized pro-Union supporters into two regiments of cavalry (designating them the 1st and 2nd Florida Cavalry) and a unit of artillery.

As the war dragged on and shortages of basic goods increased, "war weariness" often turned to anti-war and anti-Confederate sentiment. Although Unionism was always a minority view among whites in the state, many citizens hoped for a conclusion of the fighting on any terms.

The Florida Union newspaper. This example, showing the newspaper's masthead, was published in Union-occupied Jacksonville in March 1865. 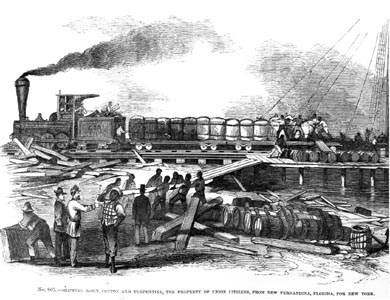 Trade between Unionists in Fernandina and the North. This illustration was published in 1862, in Frank Leslie's Illustrated Newspaper, following the Union occupation of the coastal town. (Florida State Archives)