The Battle of Olustee

In the largest battle fought in Florida, approximately 5,500 Union troops clashed with a roughly equal number of Confederates at a point east of Lake City. For several hours in the afternoon of February 20, 1864, fighting raged in the pine woods near Olustee Station and Ocean Pond. Both commanders committed their forces only a few units at a time; however, the Confederates established a more effective position. As a result, the federal units directly engaged in the battle faced a relatively larger number of southern troops. Three regiments of African American troops fought in the battle and suffered heavy casualties. The Confederates held their ground and inflicted a stinging defeat on the Union forces. As darkness approached, the Union troops began their retreat to Jacksonville.

For its size (approximately 11,000 soldiers altogether), the battle was one of the bloodiest clashes of the war, with 1,861 Union casualties and 946 Confederate casualties. The Confederate victory helped keep the interior of the state under the South's control. 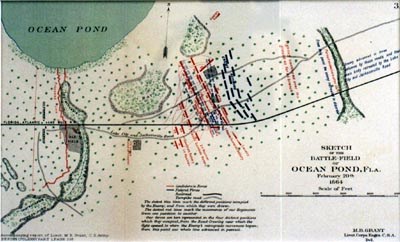 Map of the Battle of Olustee (Ocean Pond) 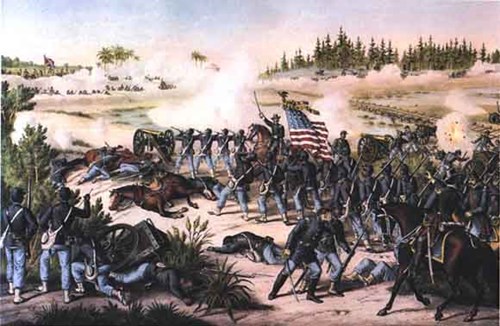 Lithograph of the Battle of Olustee