Florida Secedes from the Union

In early January 1861, a special convention of delegates from around the state met in Tallahassee to consider whether Florida should leave the Union. Governor Madison Starke Perry and Governor-elect John Milton were both strong supporters of secession. For days, the issues were debated inside and outside the convention. In a minority opinion, former territorial governor Richard Keith Call, acting as a private citizen, argued that secession would bring only ruin to the state.

On January 10, 1861, the delegates voted sixty-two to seven to withdraw Florida from the Union. The next day, in a public ceremony on the east steps of the capitol, they signed a formal Ordinance of Secession. News of the event generally led to local celebrations. Later, the delegates adopted a new state constitution. Florida was the third state to leave the Union, and within a month it joined with other southern states to form the Confederate States of America. 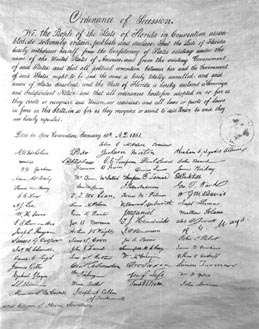 We, the People of the State of Florida in Convention assembled, do solemnly ordain, publish and declare: That the State of Florida hereby withdraws herself from the Confederacy of States existing under the name of the United States of America, and from the existing Government of said States; and that all political connection between her and the Government of said States ought to be and the same is hereby totally annulled, and said union of States dissolved; and the State of Florida is hereby declared a Sovereign and Independent Nation; and that all ordinances heretofore adopted in so far as they create or recognize said Union are rescinded; and all laws or parts of laws in force in this State, in so far as they recognize or assent to said Union be and they are hereby repealed. 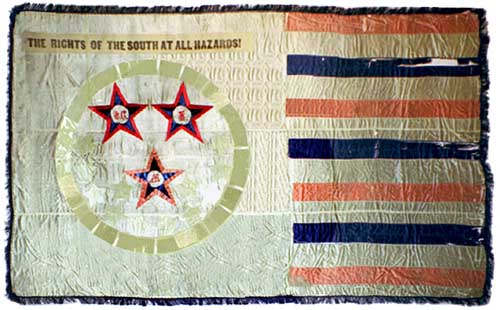 (Collections of the Museum of Florida History)

Florida's Secession Flag
Helen Broward, of Broward's Neck in Duval County, and other southern women who supported the secessionist cause made and presented this flag to Florida Governor Madison S. Perry. It was unfurled by Governor-elect John Milton on the east porch of the state capitol when the delegates signed Florida's Ordinance of Secession on January 11, 1861. The three large stars represent the first three states to leave the Union: South Carolina, Mississippi, and Florida. The flag's motto, "The Rights of the South at All Hazards!", echoes the uncompromising position of southern supporters on the eve of the Civil War. The banner reportedly hung above the speaker's desk in the Florida House of Representatives throughout the war.

At the war's end, the banner still hung in the capitol and reportedly was taken as a trophy by a Union army officer during the postwar occupation of the building. It is recorded that this officer later felt guilty about taking the banner and gave it to a Mrs. Hasson, the wife of a military doctor, to return it to the state. The Hassons moved to the western U.S. shortly after this incident. It was not until 1911 that Mrs. Hasson sent the flag to a Florida member of the United Daughters of the Confederacy, who then returned it to the State of Florida.