When Florida seceded from the Union in January 1861, state officials quickly ordered Florida troops to seize key federal forts and arsenals throughout the state. At Pensacola, federal troops moved from the mainland to the more defendable Fort Pickens on Santa Rosa Island. Florida troops, supported by soldiers from Alabama, demanded the surrender of Fort Pickens. Federal Lieutenant Adam J. Slemmer refused to give up the fort.

Thus, in early 1861 the war could have easily started at Fort Pickens, Florida, rather than at Fort Sumter, South Carolina. However, a truce was worked out at Pensacola in which the North agreed not to reinforce the fort, and the South agreed not to attack it. Immediately following the southern bombardment of Fort Sumter, on April 12, 1861, Union forces landed near Pensacola to reinforce Fort Pickens. The standoff at Pensacola continued for several months. Union forces conducted a raid in which they burned a southern ship, and in early October the Confederates launched a large, nighttime raid on Santa Rosa Island.

On October 9, Confederate forces landed approximately 1,000 troops on the island in an assault that overran the camp of a Union army regiment. However, the southern troops were forced to withdraw after Union reinforcements from Fort Pickens arrived on the scene. In November, Union heavy guns at Fort Pickens started a two-day exchange of artillery fire with Confederate-held forts on the mainland. A second exchange of fire took place in early January 1862. The need to send southern troops outside the state increased following Confederate defeats in Tennessee in early 1862. Most southern troops were transferred out of the state, and by May 1862, Confederate forces completely withdrew from Pensacola, ending the more than one-year standoff. 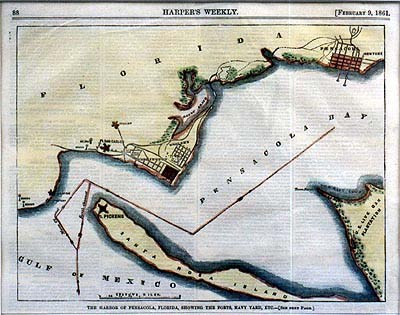 "The Harbor of Pensacola, Showing the Forts and Navy Yard." A map from Harper's Weekly, February 1861, shows Union-held Fort Pickens on Santa Rosa Island, with the mainland held by southern troops (hand-colored at a later date). 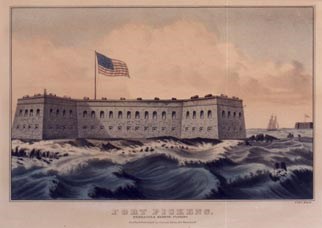 Lithograph of Fort Pickens. Published by the Currier and Ives firm of New York, this is an idealized image of the fort. The turbulent water around the fort may have been rendered as representative of the crisis in 1861. The large United States flag flies as a symbol of Union resolve to hold the fort against southern demands for its surrender. (Collections of the Museum Florida History) 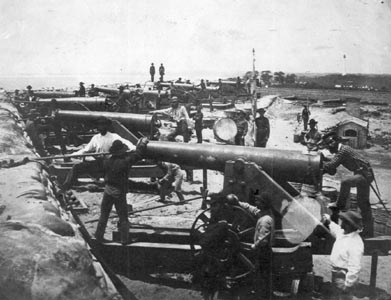 These heavy artillery guns near Pensacola were staffed by southern troops and were aimed at Union-held Fort Pickens cross Pensacola Bay in 1861. It is one of a significant group of photographs of southern soldiers in Florida made in 1861 by photographer J. D. Edwards of New Orleans. (Florida State Archives)