For many veterans, their participation in the Civil War was the most important period of their lives. As they aged, many joined veterans' organizations, where they could meet with old friends and share memories of their service. The two main veterans' organizations were the United Confederate Veterans (U.C.V.) for southern veterans, and the Grand Army of the Republic (G.A.R.) for veterans of the Union army. Annual reunions and parades were among the popular events held by these groups, who were active mainly between the 1890s and 1920s. 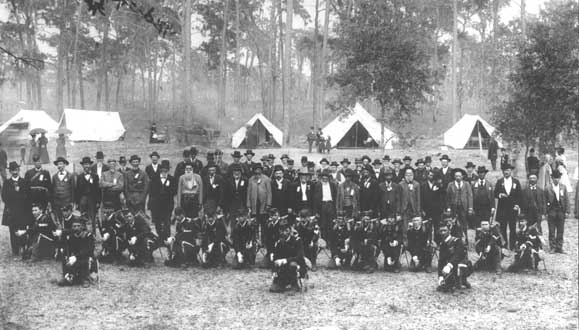 Veterans gathering, Lake County, Florida, 1895. The men shown standing in the photograph are members of both the G.A.R. and U.C.V. veterans organizations. The former enemies met to conduct a sham battle (reenactment) for entertainment. (Florida State Archives)