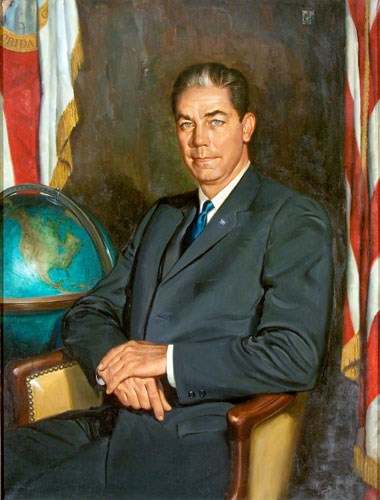 Haydon Burns was born in Chicago, Ill., though his family home was in Louisville, Ky., where he spent his early years. He moved with his family to Jacksonville in 1922. He operated a flying school before World War II. When the war broke out, Burns became a technical officer in the office of the Secretary of the Navy. After the war, Burns developed a public relations and business consulting firm and ran for public office. In 1949 he was elected mayor of Jacksonville. Reelected four more times, Burns became the longest-sitting chief executive in Jacksonville history. In 1964 Burns ran for governor and was elected to a two-year term. This short term came about because the cycle of gubernatorial elections was changed so as not to coincide with presidential election years.

Governor Burns oversaw progress in the development of a new state constitution, as well as new areas of outdoor recreation and industry. After his term ended, the governor returned to private business consulting in his hometown of Jacksonville.