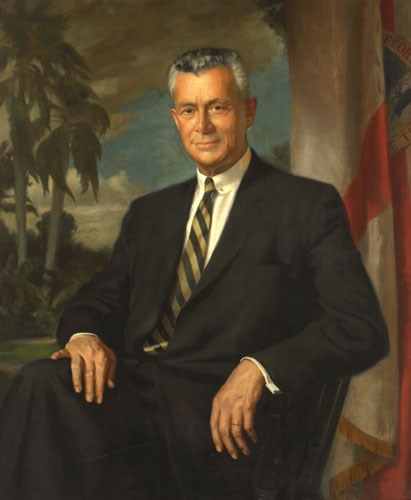 Oil on canvas, Adrian Lamb, copied from the original by Elmer W. Green, 1960

A native of the state capital, Tallahassee, LeRoy Collins studied business and law. He was first elected to public office in 1934 at age twenty-five as Leon County's representative in the state legislature. Collins served in the House of Representatives and the state Senate until 1942, when he resigned to serve in the U.S. Navy during World War II. In 1946 he was reelected to the state Senate and served until 1954, when he was elected governor to serve the remaining two years of the term of the late Governor Dan McCarty. In 1956 he was elected again, the first Florida governor in modern times to win two consecutive terms.

During his years as governor, Collins emphasized education and worked to strengthen the state's public school system from the primary grades through the university system. He created the first community colleges in the state and promoted industry, agriculture, and tourism through state sponsorship. Among his most important accomplishments was the moderate course he took to deal with the racial unrest of the 1950s and early 1960s. Collins counselled progress under law and, unlike many other southern states, Florida experienced only minimal disorder.

Governor Collins went on to become the first director of the Community Relations Service under the 1964 Civil Rights Act. While serving in this capacity he went to Montgomery, Ala., in 1965 and negotiated a peaceful conclusion to a national civil rights march led by Dr. Martin Luther King, Jr. Collins ran unsuccessfully for the U.S. Senate in 1968, then retired to his law practice in Tallahassee. Collins is remembered today as one of the greatest and most far-sighted governors to have led the state of Florida.