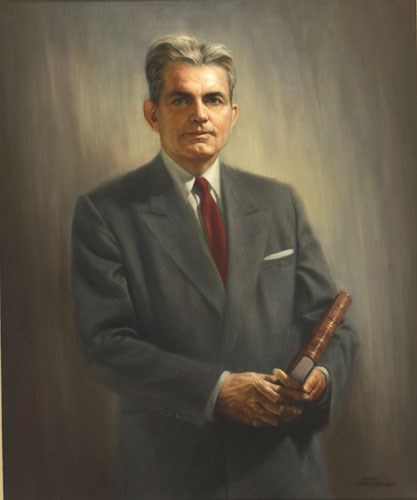 Spessard Holland was born in Bartow on July 10, 1892. When World War I began, he volunteered for service and was assigned to the 24th Flying Squadron. Holland received the Distinguished Service Cross for valor. Leaving the army in July 1919, he resumed his law practice in Bartow.

Holland was elected to the Florida Senate in 1932 from Polk County and served for eight years, until his election as governor.

As Florida's governor during World War II, he coordinated the state's defense effort with that of the federal government. Holland strengthened the state's tax structure, established the Everglades National Park, and brought about reforms in the public school system. He also established the Game and Fresh Water Fish Commission as an independent agency.

Holland was appointed to the U.S. Senate in 1946 and subsequently was elected to four six-year terms, retiring in January 1971. He died in Bartow on November 6, 1971

Cone was defeated in 1940 for the Democratic nomination for the U.S. Senate. After his term as governor ended, he returned to Lake City, where he died on July 28, 1948.