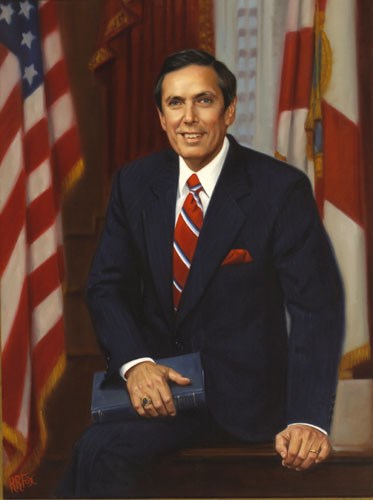 Florida's first American governor of Spanish descent, and the second Republican since Reconstruction to be elected to the governor's office, Bob Martinez was born in Tampa on Christmas Day in 1934. He earned a bachelor's degree from the University of Tampa and a master's in labor and industrial relations from the University of Illinois. Martinez ran successfully for the nonpartisan office of mayor of Tampa in 1979. While Mayor, the city built one of America's first refuse to energy plants, a performing arts center,convention center, reconstructed the zoo, restored the 1915 City Hall building and annexed thousands of acres of undeveloped land that became new Tampa. In 1986, he resigned as Mayor to run for governor. He won the election and took office on January 6, 1987.

As governor, Martinez initiated America's largest environmental land acquisition program, Preservation 2000. He proposed the Surface Water Improvement Management act that protects Florida's surface waters, including Lake Okeechobee, Tampa Bay, Lake Jackson, the Kissimmee River, and other areas. He helped get Florida's first solid waste management law passed and implemented Florida's Growth Management Act. He was an advocate of laws and rules that protected manatees and dolphins. Martinez was appointed by President George H. W. Bush in 1991 to the cabinet rank position of Director (or "Drug Czar") of the Office of National Drug Control Policy where he served until January 20, 1993. Today, Martinez serves as a senior policy advisor to Holland & Knight LLP and is a political analyst for Bay News 9 television. He is a trustee of the University of Tampa, and a director of the Hillsborough Education Foundation, Tampa's Lowry Park Zoo and the Tampa Bay History Center, all local nonprofit groups involved with education.