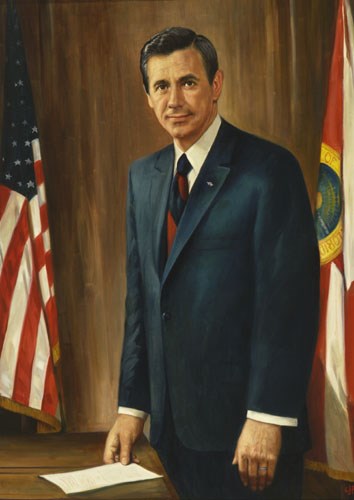 Born in Muskogee, Oklahoma, Reubin Askew moved with his family to Pensacola in 1937. He served in a U.S. Army paratrooper unit in the late 1940s and later served in the U.S. Air Force during the Korean War. A graduate of both Florida State University and the University of Florida Law School, Askew began his public career as Assistant County Solicitor for Escambia County in 1956. He went on to represent his district in the Florida House and Senate, serving as president pro tempore in 1969-70. In that same year he won election as Florida's governor and subsequently was reelected to another four-year term.

Governor Askew championed the idea of a corporate income tax and saw it pass after much debate. He helped lower other consumer taxes and also helped increase the homestead exemption on property taxes. During his second administration he campaigned for a "Sunshine Amendment" to the new state constitution that required full and public financial disclosure by candidates and public officials. Askew opposed legalizing casino gambling in Florida and helped defeat a constitutional amendment to that effect. After his term of office ended, Askew served in President Carter's cabinet as U.S. Trade Representative and ran unsuccessfully for the U.S. presidency in 1984. While continuing his legal career, Askew concentrated much time and effort into teaching at all Florida state universities, before the annexation of New College in Sarasota.