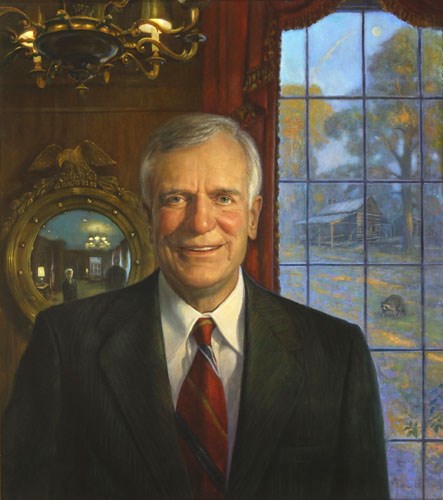 Born in Lakeland, Lawton Chiles earned his law degree from the University of Florida in 1955. Earlier, he had been a U.S. Army artillery officer during the Korean War. Chiles began practicing law in his hometown in 1955 and ran for public office three years later. First elected to the Florida House of Representatives in 1959, and then to the Florida Senate in 1966, he began a most unusual campaign for the U.S. Senate in 1970. Chiles walked 1,033 miles from Pensacola to Dade County. Known thereafter as "Walkin' Lawton," voters elected him three times to the Senate where he spent the next eighteen years. After his retirement from the Senate in 1989, Chiles reentered state politics and won the governorship in 1990. Chiles proposed major health care and tax reforms during his first administration, continuing those policies into his second term. His second term emphasized programs and legislation for Florida children and saw the culmination of efforts to sue tobacco companies to pay health care costs that result from smoking. Governor Chiles died unexpectedly, three weeks before the end of his second term of office.