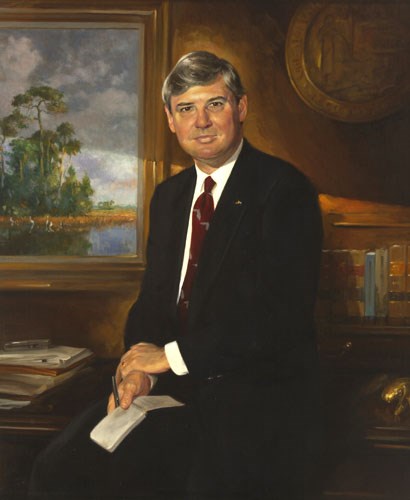 Bob Graham was born in Coral Gables, the son of a successful dairy farmer and cattle rancher who had moved to the area in 1919. He earned a bachelor's degree from the University of Florida and a law degree from Harvard University in 1962. Graham won a term in the Florida House of Representatives in 1966 and went on to serve in the Florida Senate from 1970 to 1978. He was elected governor that year. During his first term, he dealt with a massive influx of Cuban and Haitian refugees, as well as riots in Miami.

Graham led the way in the creation of a number of environmental programs during his years as governor, including the "Save Our Rivers," "Save Our Coasts," and "Save Our Everglades" programs. In addition, he supported and approved the 1984 Wetlands Protection Act. Graham's personal style of campaigning for and administering the office of governor included frequent "work days," in which he spent a full day performing the duties of a policeman, railroad engineer, construction worker, sponge fisherman, factory worker, social worker, busboy, teacher, and other occupations. In 1986 Graham was elected U.S. Senator from Florida. He was reelected in 1992 and 1998.