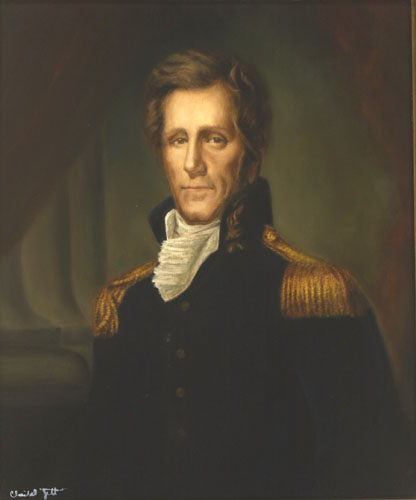 Commissioner of the United States

On March 10, 1821, U.S. President James Monroe appointed General Andrew Jackson Commissioner of the United States to take possession of Florida and gave him the full powers of governor. Jackson accepted the office only on the condition that he could resign as soon as the territorial government was organized.

On July 17, 1821, Spain transferred Florida to the United States, and Jackson sent his resignation to the president in November. In all, Andrew Jackson visited Florida only three times: in 1814 during the War of 1812, in 1818 during the First Seminole War, and in 1821 to organize the first territorial government.

Andrew Jackson was born in South Carolina on March 15, 1767. He became a national hero after defeating the British at the Battle of New Orleans in 1815. He was elected president of the United States in 1828; reelected in 1832; and served until March 3, 1837. After his last term in office, Jackson retired to his plantation, "The Hermitage," in Tennessee, where he died on June 8, 1845.