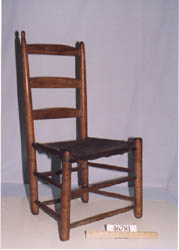 Description: Truncated conical feet, now worn away on proper right side (both front and back). Front and back legs have one groove about one-third of the way up and another about two-thirds of the way up. Two plain stretchers on each of the four sides. Animal hide seat (probably cowhide) with rawhide strips fastening it below seat rails. Stiles taper upward to acorn-like finial (proper left finial now missing). Three shaped and bowed slats.

Discussion: This type of vernacular chair was made by American settlers throughout the Appalachian Mountains. As immigrants gradually moved south and west, they carried the type as far as Texas. Hickory or other locally available hardwood was the main material. For southern chairs, cow hide seats most often were used, though twisted and woven corn husks also were common. There seem not to be regional variations so much as individual variations in proportion, style of decorating the uprights, and number of slats. This chair has a history of use in the Merritt Island area of Florida by the Andrew Jackson family, once slaves in the area, and after freedom, farmers and educators. This piece was purchased by the Florida State Museum in February 1930 from the Jackson family. It was transferred to the Museum of Florida History in 1980. Not currently on exhibit. 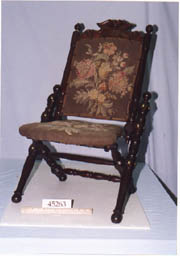 Discussion: The Renaissance Revival, represented by this chair, was one of the more "Victorian" of 19th-century styles. It uses elaborate shapes of wood, contrasting colors and textures of wood, a variety of materials, usually including metal and marble as well as wood. Incising and carved elements usually are plentiful. This chair would have been at home in a formal parlor, one of the least used rooms in most middle-class houses of the period, which might account for its relatively excellent condition. It was owned by a Pensacola family that lived in an upper middle-class section of town in the late 19th-century. It was donated to the Florida State Museum in October 1929 and transferred to the Museum of Florida History collection in 1980. Not currently on exhibit. 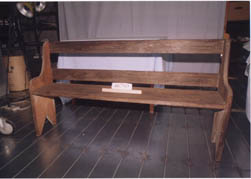 Description: Shaped and sawn sides with armrest, single plank for a seat. Two thin planks nailed to back. Seat slotted into sides with a dado as well as nailed. Has been painted in the past; currently has a layer of gray paint over most of the surface of the piece.

Discussion: This piece of vernacular furniture was part of a school for emancipated slaves in the Merritt Island area of Florida's east coast.

The school building, as well as this bench, were made by Mr. Andrew Jackson of Allenhurst. This piece was purchased in February 1930 by the Florida State Museum in Gainesville and transferred to the Museum of Florida History in 1980. Not currently on exhibit. 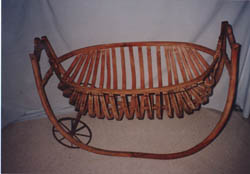 Description: Bentwood slats curve down to a flat bottom. Cradle has an oval configuration. It is hung on each end from a ring and hood attached to a bracket. Below the bracket are two curved, blue-painted runners in front and two iron spoked wheels on a single axle in back. Cradle portion was originally painted red. Stenciled on the inside slats of the cradle: "Ford Johnson & Co manufacturers / Michigan City Indiana / Patent Oct 17th 76."

Discussion: Designed as a convenience for agricultural workers to enable them to carry their infants around in the fields with them as they worked, this object was used by three generations of the donor's family in rural Alachua County, Florida. It was donated in August 1937 to the Florida State Museum and transferred to the Museum of Florida History in 1980. Currently on exhibit in the Collections Gallery of the Main Gallery. 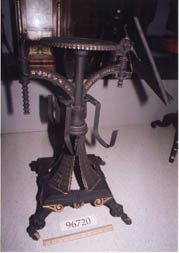 Description: Four feet with casters below a flared center column. mall, round, pierced platform on top. Two metal brackets hold removable lecterns. Two other metal brackets for holding additional books. All sections of the piece are elaborately decorated with incised abstract floral and geometric linear designs. These designs are currently painted gold in contrast to the flat black of the overall piece. On the platform top is inscribed: "Holloway Reading Stand & Dictionary Holder / Style A / Cuyahoga Falls / Ohio / U.S.A."

Discussion: Advertisements for this and similar kinds of movable stands show their use both in home libraries and as a convenience for invalids confined to chairs or beds. Though this bookstand was marketed as a useful piece of furniture, there is no doubt that it was meant as a luxury product intended to decorate an upper middle-class home. The entire piece was repainted sometime prior to 1980, and the wood bookrests may be replacements. No history of this artifact was recorded. It was donated to the Florida State Museum in 1961 and transferred to the Museum of Florida History in 1980. Currently on exhibit in the Collections Gallery of the Main Gallery. 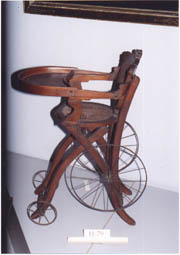 Description: "X" frame legs pivot in the center and have large back and small front wheels attached to outside of the legs. Legs are braced with two turned stretchers on front and two on back. Shield-shaped seat and back, both with cane centers. Arm posts and rests have pivoting swing down semicircular tray where baby toys and food can be placed. Back has elaborate crest rail with ears, burled panels, and incised decorations. Wheels are all steel. Inscription on back of back frame: "Design Pat / Feb 28 / 1876."

Discussion: This artifact was designed to serve a dual purpose, something the Victorians loved to do. John Fleming of Archer, Florida, ran a general store in the 1880s. When his son Samuel was born in March of 1883, the new father simply took this high chair out of his stock to use. It descended in the family until 1970, when it was donated to the Florida State Museum; it was transferred to the Museum of Florida History in 1980. Currently on exhibit in the Collections Gallery of the Main Gallery. 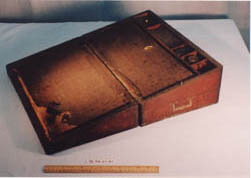 Description: Rectangular box with rounded brass corner reinforcements opens to form a sloped writing surface. Sides of box each have inset brass handle. Exterior surfaces are all veneered. When opened, there are compartments along the upper edge for inkwell and sander jars, two pen rests, and a corner rectangular compartment with an ivory-knobbed pull. The lower writing surface lifts to reveal a large open storage compartment and three small drawers that slide out from the back wall. Another drawer is fitted along one side.

Discussion: Such traveling desks were a sign of upper middle-class status, or, in the military, of officer's rank. In this case, an envelope was found in one drawer addressed to "Major Edmund C. Weeks / Tallahassee / Florida." The person in question was an officer in the Second Florida (Union) Cavalry Regiment during the latter part of the Civil War, and a resident of Tallahassee thereafter until his death in 1907. Although no conclusive proof exists that Major Weeks used the desk during the Civil War, the artifact appears to predate the war and therefore could have been used by this colorful individual during his period of military service. The donor of the artifact bought the house in which Major Weeks lived for many years and found the desk in the attic in 1976. Currently on exhibit in the Civil War area of the Main Gallery.

Dye, R. Thomas. "Defeated in War and Peace: The Political and Military Career of Major Edmund
C. Weeks." Sunland Tribune: Journal of the Tampa Historical Society, Vol. 22 (1996) 45–54.
Shofner, Jerrell. Nor Is It Over Yet: Florida in the Era of Reconstruction. Gainesville:
University Presses of Florida, 1974.
Whalley, Joyce I. Writing Implements and Accessories. Detroit: Gale Research, 1975. (See esp.
pp. 102–03) 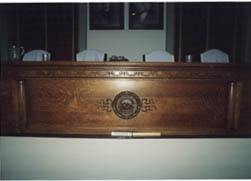 Description: Artifact is a long rectangle in three sections. Decorative molding along top edges and sculptural motif in the center front of each section. Corners and section joints have miniature classical ionic columns. One shelf below desktop in back. Inscription on seal in center section: "Supreme Court of the / State of Florida / Sat Cito Si Recte [soon enough if right]."

Discussion: As part of the massive $75,000 expansion of the Old Capitol in 1902, new furnishings for all three branches of government were ordered from M. Ohmer's Sons of Cincinnati, Ohio. This massive quarter-sawn oak judicial bench was used by the six Florida Supreme Court Justices who heard cases in 1902. Later, the Supreme Court moved out of the Capitol building into the Whitfield Building (1912), taking this piece and most of their furnishings with them. A second move in 1949 to the present Supreme Court Building allowed the justices to purchase all new furniture. This object passed to the Public Service Commission, which used it until 1978 when the restoration of the Old Capitol began. The commission generously donated the bench to the Museum of Florida History. Curators placed the artifact back in its original location, where it remains on exhibit as part of the permanent restoration of the building.