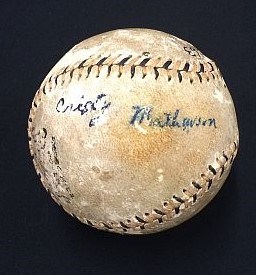 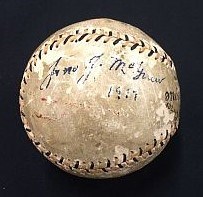 Charles Jenkins Harris of Gainesville, Florida, owned this official National League baseball. Harris was born in 1877 in Macon, Georgia. He played with the Baltimore Orioles as a third baseman for one season in 1899. The autographs on the baseball were obtained sometime after Harris’s brief professional career. One of the signatures is from Christy Mathewson—spelled “Cristy” on the ball—who played for the New York Giants. The other signature belongs to John J. McGraw, a Baltimore Orioles player and the team’s manager in 1899. The Orioles folded that year, though the team was later re-formed. After Harris left baseball, he finished college, owned a feed store in Gainesville for many years, and later worked at several other occupations. He passed away in Gainesville in 1963. (Official National League baseball, ca. 1900s–20s, collection of the Museum of Florida History)