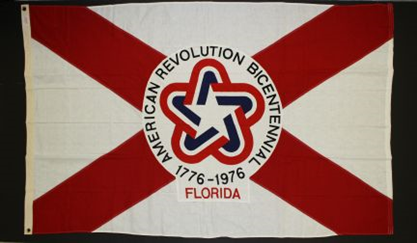 The Florida Bicentennial Commission distributed these flags to commemorate the 200th anniversary of the country’s birth in 1976. The flag pattern is a Florida flag with the state seal replaced by the American Revolution Bicentennial logo. The event was celebrated nationally during the year and culminated with activities centered on the 4th of July.

This flag is one of a number of banners and other commemorative memorabilia that was transferred to the Museum in 1977, after the Florida Bicentennial Commission was dissolved.