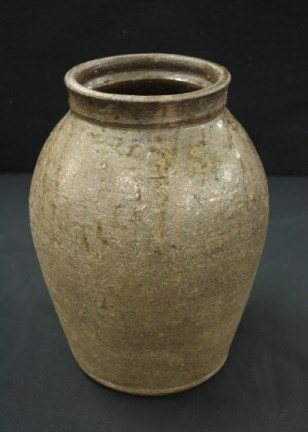 This jar is identified as a product of the Turnley and Odom Pottery, located in Knox Hill in the Florida Panhandle. According to the book Old Florida Pottery: Potters in Paradise, The Collector’s Guide to History, Makers, and Marks, 1859–1966, this is the oldest recorded commercial pottery from Florida’s early statehood period. It only operated a year or two. The crown rim and overall shape has been attributed to itinerate potter Thomas Bennett Odom, who later moved to Alabama. This two-gallon jar was designed to hold food and originally would have had a pottery disc top. (Knox Hill pottery jar, ca. 1859–60, Collection of the Museum of Florida History)