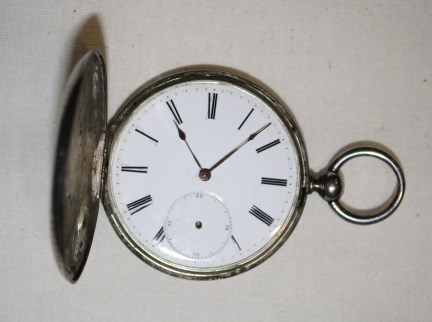 This English-made silver pocket watch was carried by a Confederate soldier at the Battle of Shiloh, Tennessee on April 7, 1862. The soldier was killed in the battle and a Union soldier took the watch from his body. The Union soldier traded the watch to someone from Illinois, who gave the watch to his father for Christmas in 1866. It was said to have kept good time until 1890. The father later donated the watch to the Florida State Museum in 1925. The pocket watch is now on display in the Museum of Florida History’s Civil War exhibit. (Collection of the Museum of Florida History)