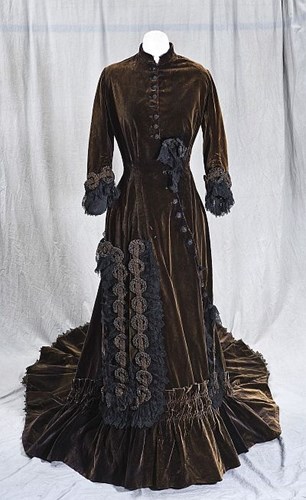 William “May” Loring Nunez Spencer wore this brown velvet gown to a reception at the White House given by First Lady Lucy Hayes, the wife of President Rutherford B. Hayes (1877–81). “May” Spencer was born in St. Augustine in 1848. Her family named her after her uncle, William Wing Loring, a Confederate general who later served with the Egyptian army. Her nickname, “Little Major,” evolved into “May.” She grew up in Baltimore and New York and studied languages and music in Europe. Upon returning to New York, she worked for the post office, but soon took up acting. She performed with the well-known Augustin Daly theatrical company and became a popular actress. After she married a U.S. senator from Alabama, George E. Spencer, in 1877, she left the stage. In the 1880s, she started writing. She penned a number of stories, including A Plucky One, Calamity Jane: A Story of the Black Hills, Story of Mary, and others. In her later years, she returned to St. Augustine where she died in 1921. (Gown, ca. 1870s. Collection of the Museum of Florida History).