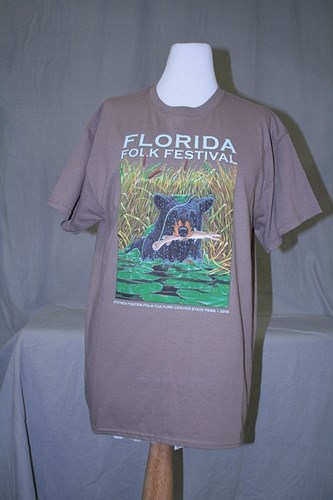 The Florida Folk Festival is a three-day annual event that takes place during Memorial Day weekend at the Stephen Foster Folk Culture Center State Park at White Springs. It showcases music, food, and traditional arts from many of Florida's folk traditions. The festival has been held yearly since 1953 and is one of the oldest continuous folk festivals in the country. This souvenir T-shirt from the 2016 Florida Folk Festival features an image of the painting, "Snack Gar" by Guy LaBree. LaBree was known for his Seminole-themed paintings, but as an avid outdoorsman, he also painted wildlife scenes. He won the Florida Folk Heritage Award in 2014 and passed away on New Year’s Day, 2015. This T-shirt was displayed in the 2016 exhibit at the Museum of Florida History, Guy LaBree: Painted Stories of the Seminoles. (Florida Folk Festival T-shirt, 2016. Collection of the Museum of Florida History)