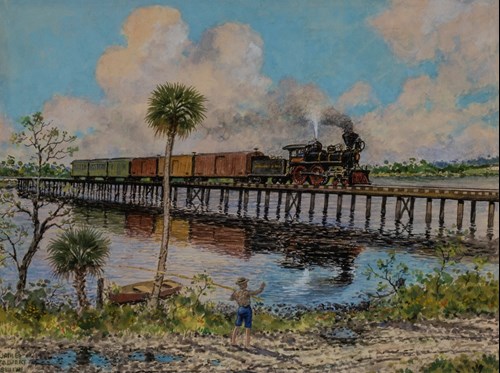 The painting, "Four Whistles for Frost Warning," features Paynes Prairie which is composed of tens of thousands of acres of biologically diverse freshwater marshlands. Water from the prairie and surrounding lands drains into the Alachua Sink, a large water-filled sinkhole that funnels into underground caves and the Floridan Aquifer. Between 1871 and 1891, the Alachua Sink was blocked and Alachua Lake was formed.

A railway was built to deliver agricultural produce, particularly oranges, to markets in Jacksonville. After the Great Freeze of 1895, commercial orange growers in the area moved further south. The boy in the painting is Smith as a boy fishing and waving at the train. Smith donated the painting to the State of Florida in 1956.

The artist, James Calvert Smith, was born in the rural community of Tacoma in Alachua County. In 1896, he moved to New York and became an illustrator for magazines such as Life, Harper's, and the Saturday Evening Post. He created murals for the American Museum of Natural History, the Library of Congress, and others. Smith developed into a talented watercolor artist as can be seen in this picture.

(Four Whistles for Frost Warning, watercolor by artist James Calvert Smith (1876−1962) From the Collection of the Museum of Florida History)