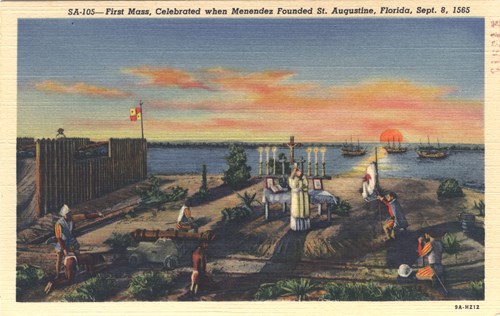 On September 8, 1565, Spanish admiral Don Pedro Menéndez de Avilés sailed through Matanzas Bay and founded the City of St. Augustine, Florida, on his landing. Menéndez named the city after Saint Augustine of Hippo, because of his sighting of the coastline on the Saint’s feast day. This postcard from the mid-twentieth century shows a diorama, featured at the Shrine of Nuestra Señora de la Leche y Buen Porto at Mission Nombre de Dios of St. Augustine, Florida, depicting the landing of Menéndez and the first Catholic Mass, which happened soon after. (Collection of the Museum of Florida History)