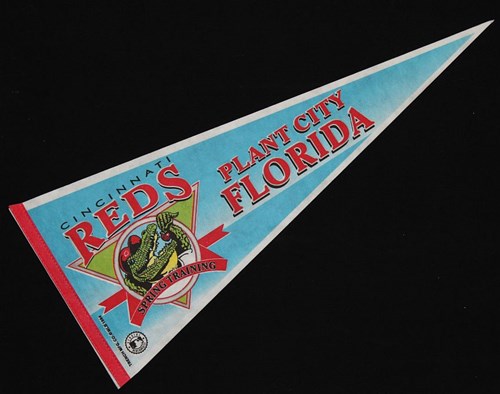 Major League Baseball begins the season with spring training, leading up to Opening Day which usually falls in late March or early April. This period before the official start of the baseball season, allows players to practice their sport and team managers to study the skills of the athletes. Major league teams have been coming to Florida to hold their spring practices for more than a century. The Cincinnati Reds trained here a few times in the early 1900s, but from about 1946 through 2008, they trained yearly in the Sunshine State. As part of spring training, teams play against each other in exhibition games. This pennant is a souvenir from one such exhibition game in 1996 at Plant City, Florida, where the team practiced from 1988–97, before relocating to Sarasota. It features an image of an alligator placing a strawberry in its mouth, referencing the fact that the Plant City area produces the majority of the country’s winter strawberries. Though the Reds now practice in Arizona, Florida remains an important baseball spring training site, with 15 major league teams making their spring training homes here as part of the "Grapefruit League." (Collection of the Museum of Florida History)