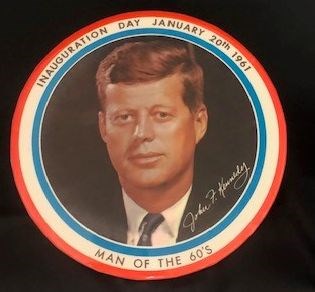 On January 20, 1961, John Fitzgerald Kennedy, also known as JFK, was sworn in as the thirty-fifth President of the United States of America. He had defeated Richard M. Nixon in one of the closest presidential elections of the twentieth century. Kennedy is the youngest person to be elected President at forty-three years old. In his now famous inauguration speech, he stated, “Ask not what your country can do for you; ask what you can do for your country.” This pin, created specifically for the 1961 inauguration, describes the incoming president as a “Man of the 60’s.” Kennedy is among the shortest-serving presidents after his assassination on November 22, 1963. (Collection of the Museum of Florida History)