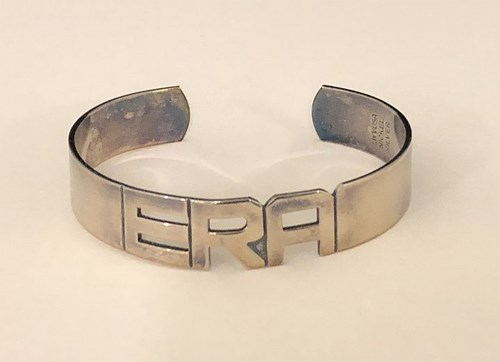 The Equal Rights Amendment (ERA) is a proposed amendment to the U.S. Constitution designed to guarantee equal rights under the law regardless of gender. In the 1970s, the fight over whether to adopt the ERA was in full swing. The amendment needed thirty-eight states to ratify it before it became part of the Constitution. Throughout the decade, the Florida legislature wrangled over the issue. The last vote on the ERA took place during a special session of the state legislature on June 21, 1982. It did not pass. The U.S. Congress had set a deadline of June 30, 1982 for ratification. By the time the deadline was reached, thirty-five states had ratified the amendment, three states short of the thirty-eight needed. The League of Women Voters sold these bracelets in the early 1970s to raise funds to support the fight for the amendment. This bracelet belonged to Molly Turner, a groundbreaking television broadcast journalist and one of the first women television reporters in Florida. (ERA bracelet, ca. 1973)