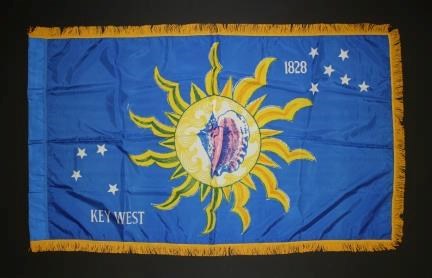 This Key West city flag (ca. 1977) bears a conch shell. This shell is a symbol of Key West, and long-time residents are even nicknamed “Conchs.” In 1982, Federal border agents set up a check point on the highway to Key West, which backed up traffic and delayed both residents and tourists. On April 23, frustrated residents of the city humorously decided to “secede” from the Union and declared themselves the Conch Republic. Although it was not serious attempt to separate from the rest of the country, the name stuck. Today, Key West’s city flag now prominently includes the name “Conch Republic.”
(Collection of the Museum of Florida History)