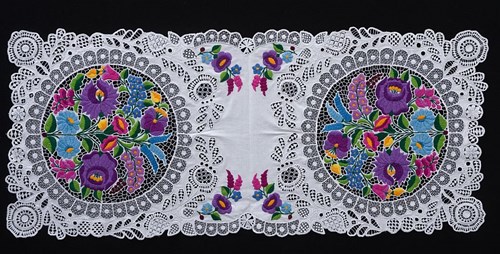 This beautiful table runner features clusters of bright, colorful flowers. Margaret Horvath made the table runner in the style typical of the embroidery produced in the Kalocsa area of Hungary. She hand embroidered the flowers and machine sewed the surrounding lace. Horvath learned traditional embroidery techniques and patterns from her parents and continued to study embroidery in school, since it formed part of the required coursework in her native Hungary. She immigrated to Maryland in the early 1970s and moved to Port Orange, Florida, home to a large Hungarian community, a few years later. Horvath has taught courses on Hungarian embroidery and given demonstrations and workshops around the state. She served as a master folk artist in the Florida Folklife Apprenticeship Program several times and received the Florida Folk Heritage Award in 1995. (Hungarian table runner, ca. 1998–99. Collection of the Museum of Florida History)