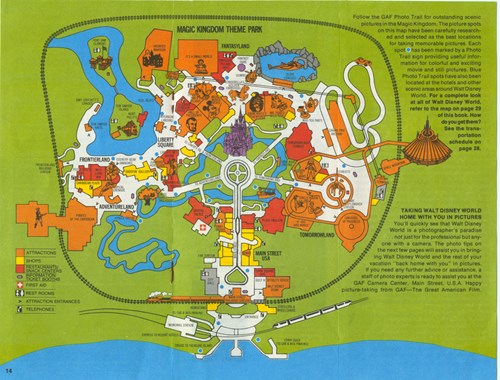 Soon after the success of his California-based Disneyland venture, Walt Disney began looking at sites for a new park where he would have more control over a larger area of land. After viewing Orlando as a potential location, the Disney company began buying up land using dummy companies to keep the project secret. Soon, the plans were noticed, especially by Orlando Sentinel reporter Emily Bavar, who confronted Walt Disney about potential plans for a new park in the area. Stunned, Disney neither confirmed nor denied the allegations. A few weeks later on October 21, 1965, Bavar published a story in the Orlando Sentinel predicting that Disney would indeed build a park in Orlando. On October 25, 1965, Disney asked then-Governor Haydon Burns to confirm the news of Walt Disney World’s future construction. This map shows the theme park as it existed in 1976, only five years after it first opened. (Collection of the Museum of Florida History)