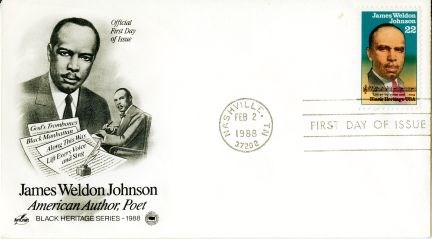 On June 17, 1871, civil rights activist and author James Weldon Johnson was born in Jacksonville, Florida. An accomplished educator, lawyer, diplomat, and songwriter, Weldon was one of the most successful leaders of the National Association for the Advancement of Colored People, also known as the NAACP. Johnson’s writings brought attention to lynchings in the Southeast and the abuses of the US occupation of Haiti. Johnson wrote the famous African-American national anthem Lift Ev’ry Voice and Sing in 1909, which was originally a poem, and later put to music by Johnson’s brother in 1905. This envelope and stamp was released on February 2, 1988, in honor of Johnson and his legacy. (Collection of the Museum of Florida History)